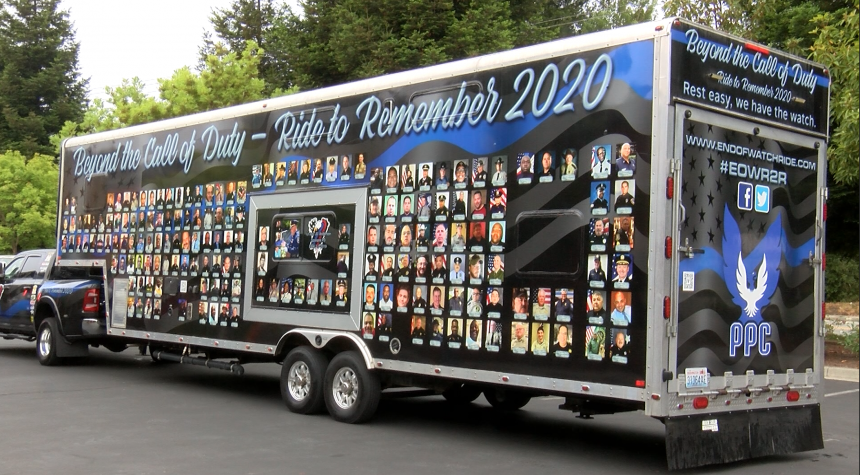 SANTA CRUZ COUNTY, Calif. (KION) A group of motorcyclists is traveling across the country to visit cities and law enforcement agencies to honor officers who lost their lives on the line of duty last year.

The "Beyond the Call of Duty End of Watch Ride to Remember" group made their 13th stop here on the Central Coast. The organization visited the Santa Cruz Sheriffs Department to pay tribute to the fallen Sgt. Damon Gutzwiller.

The six motorcyclists are traveling 22,300 miles over the course of 84 days to honor fallen members of law enforcement.

“I wanted to make sure that we just didn't forget our brothers and sisters," said Chairman and Founder of Jagrut Shan. "I'm letting the departments know that they're all in this hurt together.”

Shan was a Yakima County sheriff’s deputy for 17 years. The six motorcyclists are traveling 22,300 miles over the course of 84 days to honor fallen members of law enforcement.

Sunday will mark one year since Santa Cruz Sergeant Damon Gutzwiller was killed on June 6, 2020, in an ambush attack on law enforcement in Ben Lomond. He is one of many officers across the nation being honored during this tour.

“It means the world to us that they want to want to remember him and carry on his legacy and make sure other people don't forget either,“ said Ashley Keehn, the spokesperson with the Santa Cruz Sheriff's office

The killing of Sgt Gutzwiller shook the agency to its core, she said. According to Keehn, Gutzwiller's death brings a mix of emotions now, almost one year later, as the sheriff's office believes he did everything he can to protect the community.

“It's heartbreaking and it makes you proud at the same time," said Keehn. "That we had someone willing to lay down their life for their community and we had him in our lives. It means a lot."