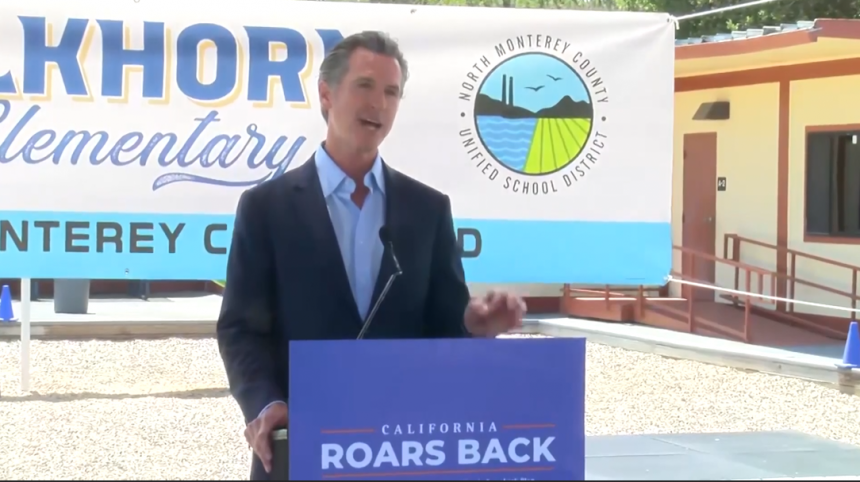 SALINAS, Calif. (KION) The recall attempt to oust California Governor Gavin Newsom appears to be heading for your ballot this Fall. Question one will have to do with recalling the Democratic governor. Question two asks voters who should replace him in office.

Right now there are more than 30 candidates who have filed their intention to run, with the California Secretary of State's Office. Not a single prominent Democratic Party politician has declared their entry into the race. This means if more than 50 percent of voters want Newsom gone, it is likely history will repeat itself and the next Governor of California will be from the Republican Party despite the party making up only 24 percent of registered California voters.

This is a chance Democrats in Sacramento seem willing to make, including ones who represent our Central Coast.

“No I don’t think it makes any sense for a Democrat to enter the race. I think we’re unified behind a Governor that the voters of California chose," State Senator Anna Caballero (D-Salinas) tells KION.

"I think most of us were looking at good science and trying to stop something that was ravaging the world and killing hundreds of thousands of people. All of us have ideas about what we would have done differently, but bottom line is California has done a really tremendous job in slowing down (the virus) and saving people's lives."

She also says a Democrat shouldn't run because the state is facing issues relating to pandemic recovery, the drought and wildfire season, along with the fact that whoever wins would only be in office for a year unless they win reelection in 2022.

"They’d have to convince the voters that they should be governor for four more years, one year later. When you think about it, that is just silly. You don’t manage that way. You don’t operate the fifth largest economy in the world that way,” Caballero said.

State Senator John Laird (D-Santa Cruz) was just elected in November 2020, but he is no newcomer to Sacramento. Laird was in his first term as an Assemblymember back in 2003 when then-Governor Gray Davis was successfully recalled.

“Some of my colleagues in the Senate point out that every time I come to the legislature a recall happens, so would I 'stop coming to Sacramento',” Laird said.

The voters removed Davis and elected Republican and celebrity Arnold Schwarzenegger. There was also a Democrat on the ballot that time, Lieutenant Governor Cruz Bustamante. A recent UC Berkeley poll shows that nearly half of all Democratic voters surveyed want a prominent candidate on the recall ballot in 2021, with another 23 percent unsure. But Laird says, if anything, having Bustamante campaigning for Governor in 2003 hurt Davis' chances.

“Polls show (not having another Democratic candidate) might have been the one thing that saved Gray Davis. Now there are these contradictory impulses where a majority of Democrats in polls say ‘run a candidate just to make sure we don’t lose the seat.' While there is the same pervasive view that this is a total partisan race if no major Democrat joins the recall and Governor Newsom is able to just run against the Republicans,” Laird tells KION.

That begs the question, should the GOP coalesce around one candidate to avoid splitting their support in case a Democrat hops in?

“That is the role of a political party. The state of California has a political party that can endorse and get behind someone. And I am in listening mode and pushing friends to figure that out. And without a party primary is tough to do that,” former Monterey County Republican Party Chairman Jeff Gorman tells KION.

Gorman ran for Congress in 2020 in California's 20th district against Representative Jimmy Panetta (D-Carmel Valley). Gorman says he is encouraged by people being politically active and stresses the ability to rally support in the party.

“I think Americans kind of went to sleep, but we are waking up. I suspect things will go badly for Gavin Newsom," Gorman said.

While Gorman acknowledges that Jenner brings more attention to the race, he calls Faulconer and Cox the more serious candidates. Cox finished 2nd in the 2018 Gubernatorial primary, ahead of all other Republicans, but lost to Newsom 62%-38% in the General Election.

“Staying power and commitment, that helps John Cox considerably. Cox also got the endorsements of national establishment Republicans, like Condoleezza Rice and Mitt Romney in 2018, and for what it’s worth, he got Trump’s endorsement as well,” Gorman said.

“Pubic opinion polls were against (Davis), and he actually had Lieutenant Governor Bustamante who campaigned saying ‘don’t choose him choose me',” Anderson said.

54 percent of "likely voters" in California approve of Newsom's job as Governor of California, with 42 percent disapproving, according to a survey published on May 25 by the Public Policy Institute of California.

But still, there is a risk on the Left not putting anyone forward. Just as Newsom's famed French Laundry dinner ignited a then-cool recall attempt, there's months left for another potential problem.

“What if there’s a scandal? What if COVID outbreaks? What if something is really different in October, November, whenever this happens," Anderson said.

The May PPIC poll finds that 57 percent of "likely voters" would vote "no" on the recall question, with 40 percent saying "yes" to remove Governor Newsom from office. Three percent selected "don't know."