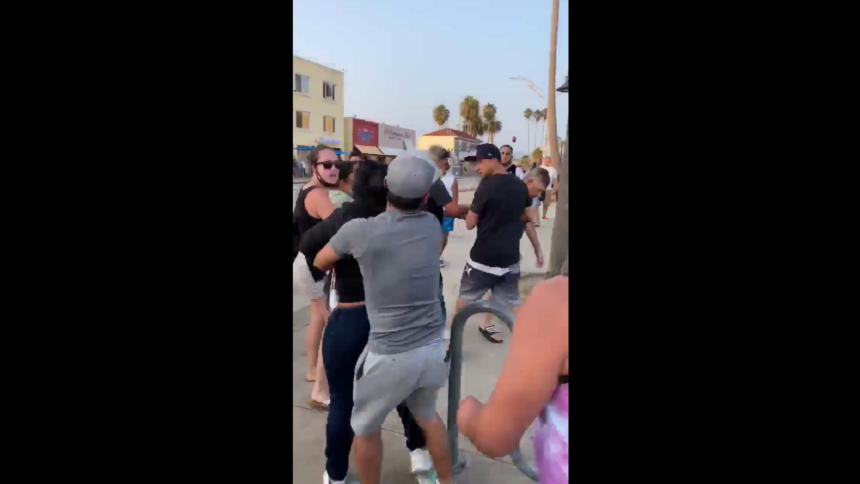 SANTA CRUZ, Calif. (KION) There was an altercation Saturday on Beach st. between a street vendor and the owner of a restaurant across the street.

According to witnesses, the owner of the Falafel Hut restaurant, across from the boardwalk, approached a street vendor and started harassing them and pushed over her hot dog cart.

A cell phone video captured the moments after the cart was knocked over. A shoving match then followed.

“She doesn’t speak English," a neighboring street vendor Guillermina Blass said. "He didn’t hear well and she started moving the cart. That’s the time he threw the cart and they start arguing.”

Blass claimed the owners of Beach Street Pizza and Falafel Hut have been harassing the street vendors.

The owners of Beach Street Pizza tell KION they are being looped in with the Falafel Hut, because the incident happened close to their restaurant.

The owners said their only interaction with the vendor was when they gave the hot dog vendor an application to make sure they were selling food lawfully.

“We take business from them. I think that’s the reason they get mad,” Blass said.

Vendors are allowed to set up and sell merchandise, according to state law.

“The city has a requirement that they obtain a permit to vend. A business license and as long as they have that, we really can’t do a whole lot,” Santa Cruz Police chief Andy Mills said.

This vendor has that permit, however she said she does not have a permit from the county health department, which is required to cook and sell food.

We reached out to the owner of the Falafel restaurant, but did not receive a response for comment by the time this story was published.

A police report has been filed. In the report, one of the restaurants alleges retaliation with vandalism of their outdoor furniture.

“We will objectively investigate, turn it over to the district attorney and they will decide whether to prosecute,” Mills said.

The street vendors say they're fed up with the way they have been treated.

“That’s the way we survive. We need to feed my family. I’m a single mom with four kids,” Blass said.

A GoFundMe has been started for the street vendor who sells hot dogs. The purpose of the fundraiser is to raise enough money for the vendor to purchase a food cart that can meet county regulations for a permit.