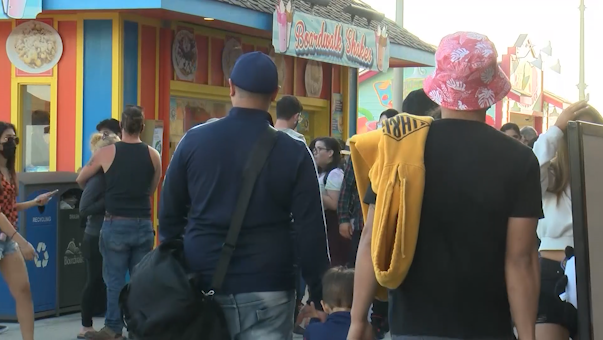 SANTA CRUZ, Calif. (KION) -- When the pandemic began, California created their blueprint for a safer economy with the metric tier system.

That system has gone as of June 15th, 2020. But now, The CDC is using their own as we try and navigate our way out of the pandemic.

Each category was based on case rates and test positivity.

The new -- CDC scale -- is also four colors. It goes from red to high to blue to low and uses the same measures case rates and test positivity -- but in a slightly different way.

"The biggest difference between the two is… what we considered purple here in California under the blueprint would be considered moderate or like the second from the bottom on the CDC. So they're at a different scale," says Dr. David Ghilarducci, the Deputy Public Health Officer for Santa Cruz and San Benito counties."

California is actually the lowest in the CDC scale right now amongst the country. It's sitting at about 93 cases per 100-thousand.

Compare that to West Virginia and other states whose residents are vaccine hesitant, where things are sitting at around 700 cases per 100-thousand.

With booster shoots soon available, counties on the central coast are expecting people to get them.

"We're going to have similar demand at that time than we did in April with that initial round of vaccinations," says Dr. David Ghilarducci.

A supply and demand issue is not expected during this rollout.
The biggest limitation is expected be just getting an appointment.
Health experts say fortunately booster shots aren't as urgent as the first two doses of the vaccine.