MONTEREY, Calif. (KION) The City of Monterey is taking a "get tough" approach on face coverings - if you are caught without one in certain business districts, you will face a fine.

City officials announced that it is putting an emergency face covering order in place and will be closing beaches and beach parking lots over the holiday weekend.

Failure to wear a mask in areas like Cannery Row, Old Fisherman's Wharf and Alvarado Street could see a $100 fine for the first violation. The city has been trying to educate the public about the health benefits of wearing a mask, but they believe it has not been enough.

"We've seen an increase in the number of visitors and guests to some of our more crowded business areas, Cannery Row and Old Fisherman's Wharf… an increase in those visitors not wearing face coverings," said Nat Rojanasathira, the Monterey Assistant City Manager.

The city says people and businesses should know by now that masks are required by state and local jurisdictions. They have tried the educational approach, but it is time to crackdown.

"I agree with it. I think the effectiveness is going to depend on the enforcement. If they really enforce it, I think it'll be effective. People will get the idea of what they need to do," said Dan Pittman, a Monterey resident.

The city's code enforcement officer will issue the citations, and has the authority to cite without warning anyone not following the rules. But these are administrative citations, not criminal charges. The city says they can be appealed in the same way parking citations are. But do not expect to get off easy.

"The citation process is already in place, so individuals can and will be cited," said Rojanasathira.

Some people, however, believe the city is going too far with this kind of enforcement.

"If you're out and about, not going into building, just walking on the side of the street, how is that hurting anybody, how should I be fined for that?" said Jason Weynand, a visitor to Monterey.

More bad news for local residents this weekend as well: Monterey beaches will be closed, including Del Monte. While ocean activities like paddle boarding will be allowed, no one can be on the beach sands to do any gathering or relaxing.

"The problem comes in when people start coming in from outside. They start packing the beaches," said Pittman. "Right now, with the holiday and everything… we saw what happened on Memorial Day, so I think it's a good idea."

The first fine will be $100, the second $150 and the third $300. The city will use its fine schedule for subsequent violations. The fines will stay in effect so long as the state's public health order regarding face coverings also remains in effect.

The City of Monterey has announced that it is putting an emergency face covering order in place and will be closing beaches and beach parking lots over the holiday weekend.

The City said it will adopt the California Department of Public Health's guidance for face covering use, and those who do not comply could face a citation with a fine of $100 for the first violation.

The order goes into effect Wednesday and will enforce mandatory face covering use in both indoor and outdoor settings in business districts.

“Our code enforcement officer has the authority to cite without warning anyone not wearing a face covering in our business areas,” said City Manager Hans Uslar. “People and business know by now that masks are required and we have to compel compliance to reduce the spread of the virus. Our educational approach has shown success, yet, we need to do much better.”

There is currently no set end date for the face covering order.

People are also required to stay six feet away from people who are not members of the same household.

The City expects crowds over the upcoming Fourth of July weekend, so it decided to close beaches in Monterey. The beach closures will apply to Del Monte, San Carlos and McAbee beaches on Saturday and Sunday.

No parking signs will be posted on streets around Del Monte Beach, the Monterey Bay Park Parking Lot and Sand Dunes Drive near the Monterey Tides Hotel. The Waterfront Lot in front of and behind Dust Bowl Brewery will stay open. 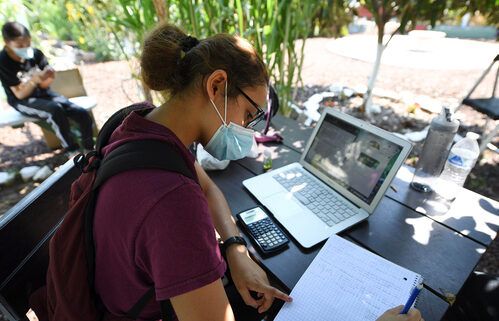