Air Quality (as of 7:00PM)GOOD for all reporting areas.(the smoke is above us, and not in the low levels) WEATHER STORYA weather system will dig down the West Coast on Monday bringing rain to Northern California. The cold front should reach the Monterey Bay Area late Monday night into early Tuesday morning. It will… Continue Reading 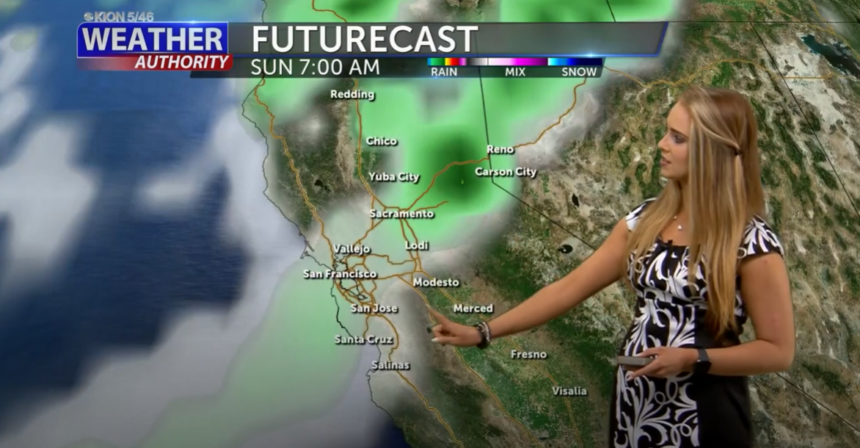 Air Quality (as of 7:30 AM)
GOOD to MODERATE for all reporting stations

WEATHER STORY
We will remain sandwiched in between two areas of high pressure through mid-week. These features are dominating the weather across the East Pacific and the Western U.S. Here on the Central Coast, this has meant tranquil, seasonable weather for us. Weak low pressure will slowly strengthen on West Coast through the end of the week, eventually allowing a weather system to sneak in from the north this weekend. It will likely bring much-needed rain to the Pacific Northwest all the way down into Northern California. How far south it gets is a little more difficult to pinpoint at this moment. The actual cold front will likely be in the process of washing out as it reaches the San Francisco Bay Area. At the moment, I think we may just see an increased chance of drizzle Sunday morning, but a lot can change in the meantime. Beyond that system, offshore winds are possible on the coast which could lead to higher fire danger.

Wednesday: Low clouds will stick around the coast for most of the day with partial clearing at times. Inland areas will be sunny after morning valley clouds. All areas will be slightly cooler with coastal highs in the 60s and 70s to low 90s inland. Breezy for valleys in the afternoon and early evening.

Overnight: Thicker low clouds cover the peninsula and will provide several miles of coverage inland from the east side of the Monterey Bay. They'll also make their way toward the southernmost part of the Salinas Valley. Patchy fog and drizzle are possible.

Extended: Temps stay cool on Friday with a deeper, more stable marine layer in place. A weather system will then descend the West Coast into the weekend with a dissipating frontal boundary arriving locally into Sunday morning. Temperatures will warm a bit with southerly flow ahead of the system and then further with disruption of the marine layer. Some light precipitation possible—mainly drizzle Saturday night or perhaps in the preceding nights as the marine layer deepens, and then a slight chance of light rain mainly in the north on Sunday. Winds switch offshore early next week, bringing warmer, dryer air into the region.