Daniel Foote, the US special envoy for Haiti, has handed in his resignation to Secretary of State Antony Blinken, saying he will “not be associated with the United States inhumane, counterproductive decision to deport thousands of Haitian refugees” from the US-Mexico border.

He adds that the US policy approach to Haiti remains “deeply flawed.”

The Biden administration is presently grappling with an influx of thousands of migrants, many of whom are Haitian, at the US-Mexico border in Del Rio, Texas. The administration has repeatedly vowed in public statements that the migrants will be turned away, drawing the ire of many Democrats and human rights groups who say it is inhumane to return the migrants because of Haiti’s humanitarian crisis.

Foote stated in his resignation letter to Blinken that Haiti is wracked with poverty, crime, government corruption and a lack of humanitarian resources. He said the “collapsed state is unable to provide security or basic services and more refugees will fuel further desperation and crime.”

He added that more negative impacts to Haiti will have calamitous consequences, not only in Haiti but in the US and our neighbors in the hemisphere.”

State Department spokesperson Ned Price said Wednesday that Foote “has both resigned and mischaracterized the circumstances of his resignation.”

“He failed to take advantage of ample opportunity to raise concerns about migration during his tenure and chose to resign instead,” Price said in a statement. He also said he was “not going to parse the contents of his resignation letter,” but disputed a number of the points in that letter.

“There have been multiple senior-level policy conversations on Haiti, where all proposals, including those led by Special Envoy Foote, were fully considered in a rigorous and transparent policy process,” Price said. “Some of those proposals were determined to be harmful to our commitment to the promotion of democracy in Haiti and were rejected during the policy process. For him to say his proposals were ignored is simply false.”

White House press secretary Jen Psaki said on Thursday that Foote “never once” raised concerns about migration during his tenure before his departure.

“I would note that Special Envoy Foote had ample opportunity to raise concerns about migration during his tenure. He never once did so. Now, that wasn’t his purview,” Psaki said during a White House briefing. “His purview was, of course, being the special envoy on the ground. His positions were and his views were put forward. They were valued. They were heard. Different policy decisions were made in some circumstances.”

CNN reached out to Foote for comment on Thursday.

Some Democratic lawmakers have asked the Biden administration to stop deporting those who have fled Haiti for the US and have slammed the administration for its treatment of Haitian migrants, particularly after videos from news outlets appear to show Border Patrol officials using aggressive tactics when confronting them.

Twelve repatriation flights have left the US and 1,401 Haitians have been returned to Haiti since Sunday, according to the Department of Homeland Security. There are less than 5,000 migrants in the Del Rio sector.

On Wednesday, DHS conducted two flights from Del Rio to Port-au-Prince, Haiti, and one repatriation flight from Del Rio to Cap Haitien, Haiti, with a total of 318 Haitian nationals on board.

CNN has previously reported that DHS expects to ramp up flights to as many as seven a day.

More than 3,200 Haitians have been moved from the Del Rio camp to CBP custody or other processing facilities along the border to be expelled or placed into removal proceedings.

In recent months, Haiti — which is still struggling with the aftermath of the catastrophic 2010 earthquake — faced a compounding crisis when a 7.2 magnitude earthquake in August left over 2,000 people dead. The nation is also dealing with the economic fallout of the coronavirus pandemic and government instability after President Jovenel Moise was assassinated in July.

Shootings and criminal violence over the summer in Port-au-Prince forced thousands of families to flee their homes. Armed groups targeted local police and set fire to civilian homes as well as a camp populated by people with disabilities. The violence prompted an estimated 13,600 city residents to flee their homes in June alone — a massive increase from the 3,400 people displaced by gang activity in the previous nine months, according to a June report by the United Nations Office for the Coordination of Humanitarian Affairs.

Many Haitians camping under the bridge in Del Rio are believed to have been living in South America since the 2010 earthquake and the circumstances in the region further fueled migration to the US southern border.

“People still have yet to get drinking water and medical care,” Phillips said. “So what needs to happen is to stop the deportation flights to Haiti effective immediately and instead welcome Haitians to screen them for asylum … so they don’t have to return to where they fled.”

Many Democrats have expressed outrage over the Biden administration’s policy of deporting Haitian migrants and recently surfaced video of Border Patrol agents using what appear to be aggressive tactics to confront migrants.

On Wednesday, nine members of the Congressional Black Caucus met with several Biden administration officials at the White House and reiterated that they plan to respond with congressional action.

“I’m pissed. I’m unhappy. And I’m not just unhappy with the cowboys who were running down Haitians and using their reins to whip them. I’m unhappy with the administration. We are following the Trump policy,” California Rep. Maxine Waters, who didn’t attend the White House meeting, said during a news conference on Wednesday. “What we witnessed is worse than what we witnessed in slavery: Cowboys with their reins whipping Black people, Haitians, into the water.”

“Despite the Administration’s rapid deployment of personnel and resources in response to this crisis, much of the strategy to address the care of these vulnerable individuals is deeply concerning,” they wrote in a letter.

This story has been updated with additional details and background information. 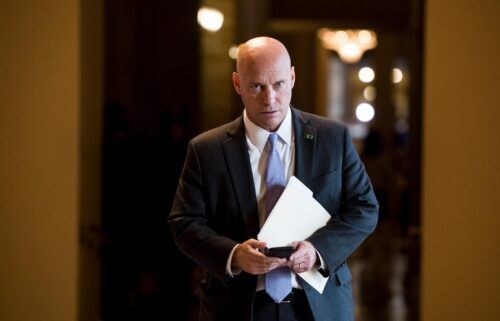 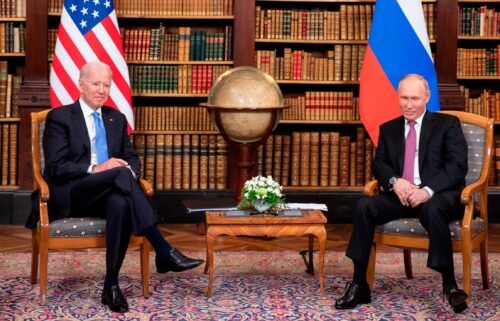 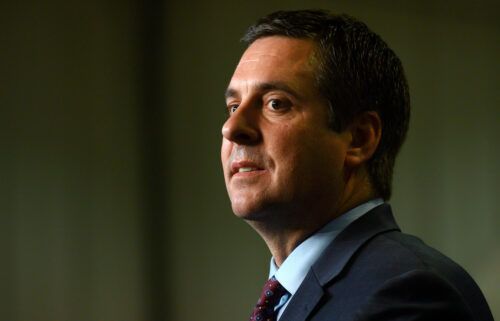