SALINAS, Calif. (KION) Spending for law enforcement has undergone cuts and is not what it used to be. Agencies now patrol communities with less funding, and on the Central Coast, some departments say that is putting a strain on their ability to serve and protect their communities.

Hundreds of calls for service over the Fourth of July weekend kept police officers and Sheriff's deputies busy around the Central Coast. In Salinas, police responded to a total of 615 calls for service related to fireworks alone during the month of June and the first days of July.

Summer months are known for more reports of violence, and now people are free from shelter in place orders.

Meanwhile, the Monterey County Sheriff's Office says their service calls have been increasing over the years. The Sheriff's Office says they have already seen an increase in violent crime- 141 incidents this year so far, compared to 119 last year. At both agencies, budget cuts are creating a staffing shortage, with responding officers and deputies stretched.

"There are days they're going call-to-call," said Monterey County Sheriff Steve Bernal. "When you complete one call and you're getting called to another call."

Frese said, "With call volume picking up, and we're not adding any officers to our ranks, we just don't have another solution."

After the Salinas City Council approved the budget for this fiscal year, the police department was left with 15 sworn officer positions frozen along with 6 civilian positions. There is a total of 149 officers now, down 38 from the department's peak years ago. Only 72 officers can be spread out over four shifts per day, with many working overtime.

At the Monterey County Sheriff's Office, 17 sworn positions were frozen last fiscal year. Out of those, 7 were completely eliminated this year. There are 57 patrol deputies now, down from 64 a year ago.

The Sheriff's Office also says increasing costs and staffing requirements at the jail also contribute to the shrinking patrol staff.

Still, groups like MILPA, which are proponents of police reform, argue that taking funds from law enforcement to use for community development and prevention will have a greater impact on fighting crime.

"When you look at budgets, when 45% of the city budget goes to a police department and only 13% goes to libraries and parks, there's a bigger discussion around 'What does public safety really mean?'" said MILPA Policy Program Director Cesar Lara.

MILPA does not believe in abolishing the police entirely, but they want to see changes in how cities and counties approach the issues.

Both Sheriff Bernal and Chief Frese believe the national conversation about "defunding the police" have impacted departments on the Central Coast. They say it all boils down to people under standing that the fewer officers that are on patrol, the slower the response is for residents.

"Our response times are going to take a lot longer with fewer deputies out on the streets... patrolling over 3,700 square miles," Bernal said. "So we're keeping our heads above water."

"Sometimes we have so many priority calls coming in, either at one time or over the course of 15 to 20 minutes, that we simply cannot get to the non-emergency calls," Frese said. 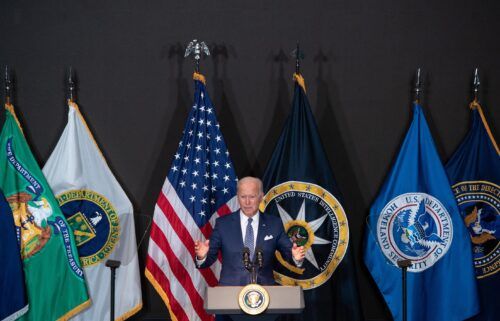