SCOTTS VALLEY, Calif. (KION) Hundreds of first responders completed a multi-day active shooter training session at Scotts Valley High School, on Wednesday.The training comes just a little over a month after the deadly shooting at a VTA Railyard that claimed the lives of nine people.

"Our rescue task force is where law enforcement and fire work together," said Chief Nader Oweis, Sonoma State University, during a group conversation after armed, but unloaded, officers entered the high school premises.
KION got a first-hand look at the active shooter scenarios Central Coast agencies were under, from first aid training, trauma care, to responding to an active shooting scene. The more realistic, the better the training.

“It’s really important to know how to communicate together kind of learn how everybody kind of does something so we can ultimately neutralize the threat that's occurring and provide medical care to people that have been injured," Chief Steve Walpole, Scotts Valley Police Department.

Across an eight day span, forty different agencies and roughly five-hundred officers and firefighters went through the training. The program has existed for 9 years. It first started at UC Santa Cruz and for the past two years has taken place at Scotts Valley High School. The sessions provides different work stations, group exercises, and critical incidences first responders may encounter.

“It’s as close as we can get to the real thing. The fact that we’re out through a little bit of physical excursion and there is going to be some intense moments and the adrenaline gets going and you stay focused with the task that are at hand,” Sargent Henry Robles, Watsonville Police Department.

Sargent Robles is a 31-year veteran with the city of Watsonville and has done a handful of these trainings throughout his career. But it's not just first responders playing a role. The Red Cross is also here along side these agencies providing support for everyone impacted, just as the organization would during an actual event. Patsy Gasca, Disaster Program Manager for the Red Cross Central Coast Chapter said, it's an all too familiar situation.

“Unfortunately, in Santa Cruz County we have had the experience twice now to do this. We hope that we never have to see this again. But we are here, we train with our partners, so they are also familiar."

Within an hour, sometimes 15 minutes, Gasca says, they are on the ground ready to go. Volunteers have also played a huge role during the training scenarios, acting as real students and teachers inside the classrooms. It's this type of real life practice that keeps agencies flocking to the Central Coast year after year.

Eight days is the longest this training has ever been, and they are all in it for the same goal. Stop the emergency, keep people safe, and attend to the needs of victims. 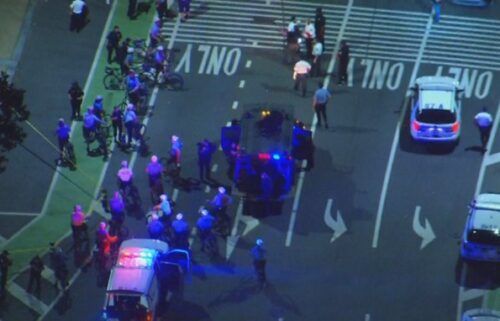