Air Quality (as of 8:00AM)
GOOD for most reporting stations, MODERATE for Gilroy and Hollister

WEATHER STORY
No major changes in the weather are expected in the short term. Our light west-northwesterly flow will get a little stronger and a little more northwesterly on Tuesday. That will change the configuration of the clouds around the bay. We’ve been in a persistent pattern for the past few days without much change. By Tuesday, Santa Cruz will be sunnier and warmer, but not much will change on the south side of the bay. High pressure will slowly edge back to the west from the Four Corners region as we head into the weekend. This will lead to a net warm-up that will mostly be felt inland. By Saturday, even coastal areas will see highs at or above normal, while inland areas are scorching in the 90s-100s. Some monsoonal moisture will rotate around the high from the south, but at this moment, that may only translate to some high cloudcover.

Monday: Morning low clouds will break to sunshine for inland valleys. Low clouds will hang around the coast and bays with partial clearing around Santa Cruz. Expect coastal highs in the mid 60s to low 70s with inland highs ranging from the 70s-80s in the near coastal valleys to the 90s-100s in the southern valleys. Onshore winds will get gusty for the valleys in the late afternoon and early evening.

Overnight: Low clouds will fill in around the coast and major inland valleys. Patchy drizzle likely. Expect lows in the 50s for most areas.

Tuesday: More coastal drizzle possible overnight. Morning low clouds will break to sunshine for inland valleys. Low clouds will hang around the coast and bays with clearing on the north side of the bay.  Expect coastal highs in the low 60s to mid 70s—warmest on the north side of the bay--with inland highs ranging from the 70s-80s in the near coastal valleys to the 90s-100s farther inland. Onshore winds will get gusty for the valleys in the late afternoon and early evening.

Extended: Temperatures will slowly warm up on the coast into the weekend reaching seasonal normal on Friday and exceeding them by Saturday/Sunday. Inland areas will warm much faster, landing above normal by Tuesday and staying that way through the weekend. Inland highs may be as much as 10-20ºF above normal by the weekend. Overall coastal cloud coverage will decrease slightly by the weekend, but high clouds will stream in from the south starting Thursday. 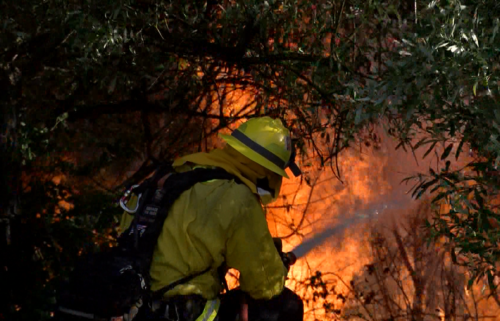