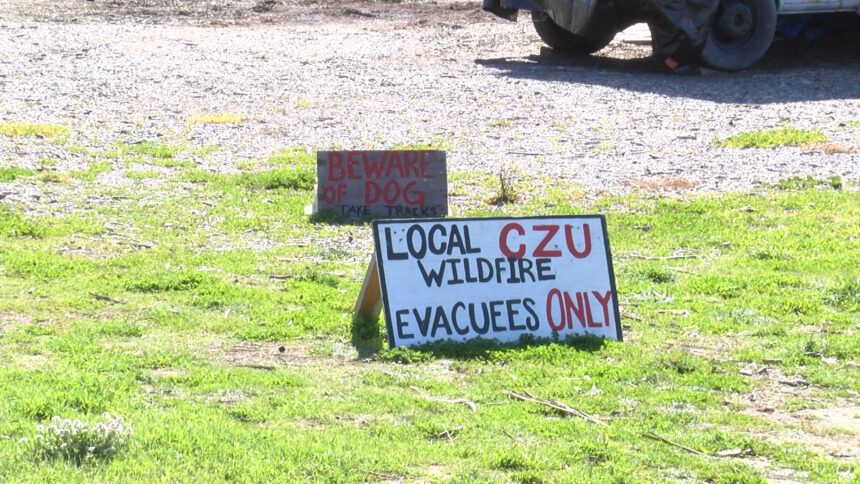 DAVENPORT, Calif. (KION-TV) -- In Davenport, many displaced residents are still seeking shelter in their vehicles in a parking lot by the shore as they piece together their next steps following the devastating CZU Lightning Complex fire.

“Most of them are Last Chance and the others, Bonny Doon. There was probably five more people but everybody doesn’t have like an area or resource to go to so the community all came together and they’re all okay with this," says one fire victim who is currently residing in and managing the lot.

This fire victim says her home was destroyed in the fires before she could officially move in.

Now, she and others in the lot say they are facing issues with transients and looters on site.

“We’ve had people at 3:30 in the morning in between our areas and there’s no reason to be, we’ve had people with drones that are coming in so close and it’s just so ridiculous, it’s degrading, it’s so rude and it’s uncomfortable," she says.

The fire victim is now asking the community for help.

“One thing that we could really need are the cargo box trailers just to store everything in so it’s locked and put away. It’s not an advertisement for thieves."

Although nothing is set in stone and rebuilding efforts still continue in many Santa Cruz County areas, the county says the state is considering possible new safety regulations for any new properties and properties destroyed during the CZU fires that are to be rebuilt.

County Spokesperson Jason Hoppin says some of the amendments discussed by the state are widening roads and establishing 100 foot defense barriers for safety...not just to protect homes, but to save lives in the event of another massive fire.

“They’re really looking for a road that is at some point, fourteen feet wide, it’s just so cars can pass each other. Residents at risk, for example, they may live up a road, these roads can go on for a couple miles that has no outlet on the other side, so if that road were to be cut off, we’d have to look at some other ways to get people out of there," says Hoppin.

Hoppin explains, any new regulations would apply to a large portion of the Santa Cruz County areas, particularly the mountainous areas.

He adds, there are other exemptions to be considered, including for those rebuilding homes destroyed in the fires.

“If your property is going to look substantially different than it did before the fire, you may be looking at some added requirements but if you are looking to rebuild your home, I think it’s up to twenty percent increase in square footage, you’re going to be fine," says Hoppin.

In the meantime, displaced residents say they will just have to wait to see where they will live next.