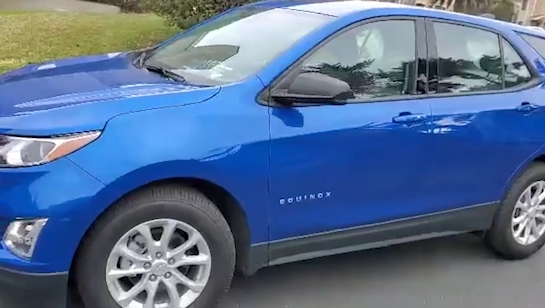 SEASIDE, Calif. (KION) -- Things are moving in the right direction after a local woman messaged Max after having a traumatizing experience with an SUV she bought nearly a year ago that she says just kept falling apart.

"Sometimes it's really hard to turn the car off," says Dawn Cowan.

"I'll shut if off. I'll hit the button and it won't turn off," says Cowan.

Her radio started flickering and resetting and part of her dashboard started to become disconnected.

She says she's taken the car in for service five or six times, but the problems were never fully resolved.

The car dealership declined to comment on this story, but said on the phone that if it's a problem with the vehicle, they need to contact general motors.

"I feel like nobody cares what's happening to me. I feel like I'm just a number to them. like they don't give a crap about one person who's having these problems because they're such a big corporation," says Cowan.

"After checking with our field team it appears the customer's original issue has been resolved, as well as a few additional requests the customer had."

"It is a relevant case and we do see a lot of it," says Steve McFarland, the CEO of the Better Business Bureau. He also says it's something he's actually seen for years in many industries and he has some advice.

Steve McFarland, the CEO of the Better Business Bureau, says it's something he's actually seen for years in many industries. He has some advice.

"Post about it. post to the blogs. Go to the BBB. File a complaint. Get it known out there to where this provider will kind of go 'oh crap I better stop doing this or I'm not going to get any business, especially from females,'" says McFarland.

We reached out the Better Business Bureau. Also, after repeated calls and e-mails to General Motors, some progress has been made.
GM finally approved Dawn for three options: a repurchase buyback, a trade-up for another vehicle, or a replacement of the same vehicle.

We want to do the repurchase buy back actually, we do. But, we have to get it down to zero. Like I don't want to owe anything," says Cowan.

Right now, Dawn is working with General Motors on the repurchase buyback.