Chief Deputy John Thornburg said they were not sure the firearms were bb guns until suspect Vahe Ohanian, 57, was arrested, and they picked them up themselves.

Thornburg added the guns were hyperrealistic. A fourth bb gun was also recovered with a colored tip.

Thornburg added that the suspect fired two rounds into one patrol car's window while deputies were inside the car. Deputies did not return fire because Ohanian did not fire again and appeared nonaggressive.

The bullet splintered as a real bullet would, and Ohanian had guns registered in his name. Sherrif's had reason to believe Ohanian shot real bullets at them, and they treated the situation as such, said Thornburg.

This is how the Sheriff's Office was aware the suspect had two registered handguns to him from the 90s.

Thornburg added had Ohanian reached for the rifle again or shot again, their response would have been different. Thornburg said when they can talk people down; they will.

Thornburg said people weren't listening when asked why he allowed people to get right below the shooter, and there is only so much they can do in those situations. Had Ohanian reached for his gun, an appropriate response from officers would have been made.

The apartment was searched, and four bb guns were found. Thornburg said they did not find any real firearms in his apartment.

Ohanian faces three felony charges: obstructing and resisting an executive officer, assault with a deadly weapon other than a firearm on a peace officer using force likely to cause great bodily injury, and threatening a crime with intent to terrorize, according to the inmate log.

The charges are what they are because the suspect fired a bb gun.

According to the inmate log, he has been booked into Monterey County Jail, and his bail is set at $1,005,000.

Ohanian also had a warrant for his arrest after missing a court hearing for a public intoxication charge, said Thornburg.

UPDATE MAY 26, 2022, at 4:19 p.m.-- The Monterey County Sheriff's Office said that the man accused of shooting at deputies Thursday is a Marine veteran.

The sheriff's office confirmed with KION that Vahe Ohanian, 57, who stood on his balcony negotiating with police for hours, had three firearms in his home: two handguns, a rifle and a knife.

One neighbor told us that she's noticed a mental decline in the veteran over the last two years. He was friendly, but recently, she complained to the property manager that he was naked on his balcony.

The rent is $1,700 at the complex, and the same neighbor said that she went inside his apartment and saw it was empty.

Ohanian faces three felony charges: obstructing and resisting an executive officer, assault with a deadly weapon other than a firearm on a peace officer using force likely to cause great bodily injury and threatening a crime with intent to terrorize, according to the inmate log.

Ohanian also faces a misdemeanor for disorderly conduct while under the influence of alcohol. According to the inmate log, he has been booked into Monterey County Jail, and his bail is set at $1,005,000.

UPDATE MAY 26, 2022, at 2:53 p.m.-- Seaside Police have lifted all shelter-in-place orders after arresting a man who allegedly shot at deputies on Thursday.

The following areas shelter-in-place orders have been lifted: La Salle Ave up to Noche Buena to San Pablo, San Pablo to Baker, Baker to Echo and Echo to La Salle on Fremont, according to police.

The roads will all be open shortly, said police.

After nearly four hours of negotiations with officers, the man came down and surrendered peacefully.

Seaside Police Chief Nick Borges said officers are checking the suspect's apartment to make sure the area is safe but expects the incident to be wrapped up shortly.

Seaside Police said to avoid the surrounding areas near San Pablo Avenue due to a suspect who fired several rounds at officers. The suspect is currently on their patio near Freemont Boulevard.

Shelter-in-place orders have been issued for the areas of La Salle Avenue up to Noche Bueno to San Pablo, San Pablo to Baker, Baker to Echo and Echo to La Salle on Fremont. Avoid the areas listed above in Seaside.

These orders are for people in the area until further notice, said police.

People who have been evacuated from the danger areas are advised to go to the 7/11 on Echo Avenue at Fremont. People will be transported from there to the Oldemeyer Center on 986 Hilby Ave and be given food, beverages, restrooms and a place to relax, said Borges.

Interim Seaside Police Chief Nick Borges says that police are on Fremont at Echo and are negotiating with a man who fired several rounds at officers.

Borges said the Monterey County Sheriff's Office was serving an eviction of a subject with a gun. He fired a few rounds, but nobody was hurt.

Police are currently trying to negotiate with the suspect. He is now in his residency on a balcony. Drones and the SWAT team have been sent out to assist with negotiations.

This incident happened Thursday morning at around 9 a.m., according to police. 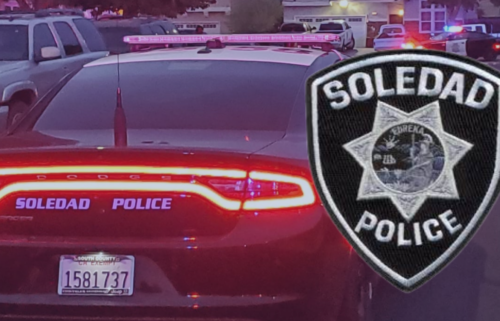