Norwegian police have named the suspect in Wednesday’s bow-and-arrow attack in the southern town of Kongsberg that left five people dead and three injured, in what they are treating as suspected terrorism.

Espen Andersen Bråthen, a 37-year-old Danish citizen, is due to appear in court on Friday, but police have yet to reveal the charges he faces.

Norwegian Police Security Service (PST) chief Hans Sverre Sjøvold told reporters on Thursday that the attack “appears as if it may be an act of terrorism” but noted that is important the investigation goes ahead and “we get to clarify what the motives of the accused are.”

Officers had been in contact with the man, including “as a result of previous concerns related to radicalization,” police chief Ole Bredrup Sæverud said. Officers also revealed the suspect had converted to Islam.

The suspect had not appeared on their radar this year though, Sæverud indicated, saying the police had “received no reports in 2021 regarding radicalization.”

Four women and one man were killed in the attack, while three people were injured. “We have some information about the five people who died. There are four women and a man, no one has been formally identified yet. It will take some time. They are all aged 50 to 70 years,” Sæverud said.

A timeline of the events Wednesday revealed that only 35 minutes elapsed between the first reports to police of a man shooting with a bow and arrow and the arrest of the suspect.

The first call alerting police came into the operations center at 6:12 p.m., Sæverud said. A patrol was immediately sent to the location, followed by three more, he said. The first patrol on the scene only briefly spotted the perpetrator.

In the minutes afterward, messages were coming in from members of the public that the suspect had been spotted in several places across Kongsberg, he said.

The suspect was arrested at 6:47 p.m., by which time 22 police patrols had been deployed and more resources were on their way. Warning shots were fired at the time of the arrest, Sæverud said.

From what police now know, “it appears reasonably clear that probably everyone was killed after the police were in contact with the perpetrator for the first time,” he said.

The perpetrator is believed to have acted alone, police said.

One witness to the attack, Linda Ostergaard, was cycling home with her two daughters when she came across the attack, according to Swedish CNN affiliate, Expressen.

“My youngest daughter was a couple of meters in front of me when she suddenly stopped as there were lots of blue lights,” Ostergaard said.

“We saw a police car with sirens on come, and it stopped at the top of the street. Two policemen jumped out of the car with weapons and ran into the shop here, and they were shouting, ‘armed police, put down the weapon.'”

“Then we were told to move away, that we had to get to safety. So we ran to the corner there, and stood there on the corner. There, we met another man who said that it was he who had called the police, and that the perpetrator had shot after him, down here, and then we saw that there was an arrow down there in the road. There was no crossbow only a long arrow lying there.”

‘Perpetrator has carried out horrific acts’

The attack came on the eve of a new government taking office after last month’s parliamentary elections unseated the long-ruling Conservative Party.

Labour leader Jonas Gahr Store assumed the role of Prime Minister on Thursday. He said on social media that his first phone call in the new role was to Kongsberg’s mayor.

“We have during last night, this morning and this afternoon learned more about what atrocities have taken place, what cruel acts innocent people were exposed to, what unrest and fear hit the community in Kongsberg, and spread to the whole country,” Store added during an introductory press conference.

“This shows that our society is vulnerable,” Store said. “It is not good for us to conclude what is the motive, what is behind this action. The police must be allowed to finish their work and clarify, but it emphasizes again that preparedness is a complex task for a society.”

The new Prime Minister will visit the town on Friday, he confirmed. The night before, as reports of the attacks were still emerging, his predecessor Erna Solberg — during her final hours in the role — described the developments as “gruesome” and promised “all necessary resources” were being deployed.

“The perpetrator has carried out horrific acts against several people. It is a very dramatic situation that has hit Kongsberg society hard, and the events shake us all,” she said.

Norway’s King Harald expressed his sympathies Thursday in a short message to the mayor of Kongsberg, saying that “the rest of the nation stands with you.”

“We sympathize with the relatives and injured in the grief and despair,” he said. “And we think of all those affected in Kongsberg who have experienced that their safe local environment suddenly became a dangerous place. It shakes us all when horrible things happen near us, when you least expect it, in the middle of everyday life on the open street.”

The attack comes just over a decade since Norway’s worst terrorist attack.

In July 2011, Norwegian far-right extremist Anders Behring Brevik killed 77 people, many of them teenagers, in a bomb attack and gun rampage. He was sentenced to 21 years in prison, the maximum possible term.

In August 2019, another man stormed an Oslo mosque armed with guns before being overpowered. That year, the country’s intelligence service reported that right-wing terrorism was on the rise globally, and warned that the country would likely be targeted in the near future. 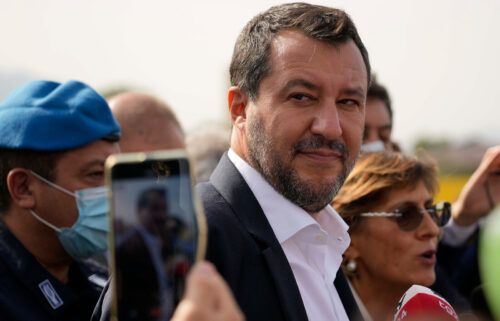