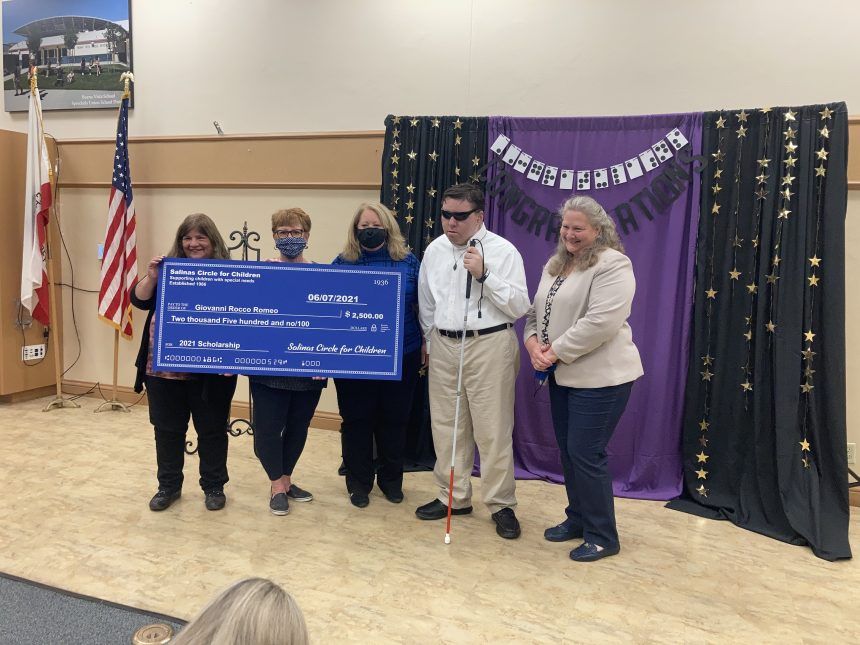 SALINAS, Calif. (KION) Giovanni Rocco Romeo is being awarded and recognized for his academic achievements with a college scholarship from Salinas Circle for Children.

Romeo is a visually impaired and deaf student that has participated in Monterey County Office of Education programs since he was 17-months-old.

Claps and cheers filled the room as Giovanni Rocco Romeo approached the stand to receive his scholarship and give his speech. The road to college has been tough given his circumstances but there hasn't been a challenge that Rocco hasn't gladly accepted. From being an AP student, a yellow belt in Judo, winning 1st place in the Braille challenge out of San Francisco, and much more, his ambitious attitude radiates when speaking about what he wants to study.

'I would like to study everything I can possibly learn and I just want to learn what I can," said Romeo.

Like any other high school student, he tells KION about this AP tests, preparations, and some of the classes that he took during his last semester of senior year but with the added technology needed to accommodate his needs, he says this scholarship will assist him and his goals in college.

His mother, Sascha Romeo, says that for the time being, Rocco will be attending Hartnell College, but they have their sights set on the Helen Keller National Center for Deafblind Youths & Adults that teaches valuable life skills like riding the subway or preparing for an interview.

"It's a living program that is specifically for deaf, blind young adults and it's all the way in New York and it's the only center of its kind in the United States," said Sascha Romeo.

For students like Rocco, his disabilities can be an added obstacle but his family always believed in his abilities and potential.

He will be attending Hartnell College in the fall and has plans to continue his education at the Hellen Keller National Center in New York when they open.