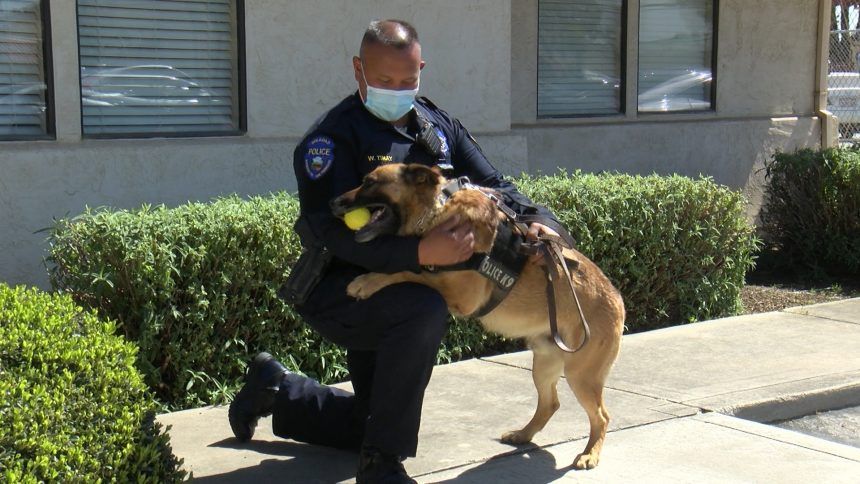 SOLEDAD, Calif. (KION) The Soledad Police Department has announced their K-9, Huro, will be retiring.

Huro is receiving a proclamation from the Soledad Police Department for all his heroic work with the department since March 2017. He is the only K-9 that serves all of south Monterey County and was primarily assigned to narcotics detection and apprehension cases.

Huro has served in a number of high profile cases including the Gilroy Garlic Festival shooting and the tracking of some Salinas prison escapees.

In just these three years, Officer Tinay and Huro walked over 1,500 miles together. For Tinay, he feels lucky to continue having Huro by his side.

"We have that bond to where we put our K-9's in situations where we know is very dangerous. I'm blessed and lucky to have K-9 Huro come home with me cause a lot of handlers have lost their K-9s in the line of duty, " says Tinay.

For Carla Strobridge, Mayor Pro Tempore for the City of Soledad, dogs like Huro can be a great way to connect with the community.

"Dogs are so wonderful in that regard. Everyone can relate to having a dog as a family member, or as a friend, or as a companion and so it really helps bridge that gap between our community and the police department," says Strobridge.

"He does all the work, his scent nose, everything is off his nose. It's all him. I just hold the leash," says Tinay.