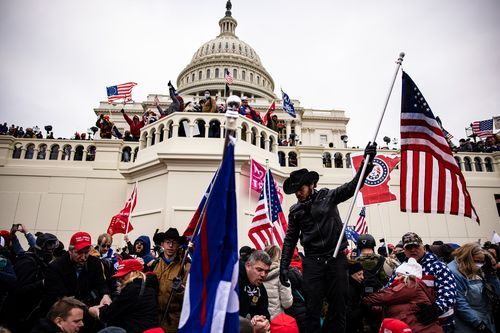 "As educators, we are charged with the responsibility to educate students about the important history that shapes current events, build their capacity for critical thinking, and inspire them to actively participate in civic engagement to help make their communities safer and stronger," the districts said in the statement. "These events in our nation’s Capitol have some members of our community, especially our students, frightened, confused, and upset. Our teachers and administrators are looking at how to establish a safe space for discussion and learning about these still evolving events today and in the weeks to follow."

The districts also addressed the events in comparison to how protests were handled over the summer.

"The ways in which yesterday’s event unfolded in Washington DC reveal a striking and important discrepancy. Our children are witness to the vast disparity between the mostly peaceful treatment of this seditious mob and this summer’s brutal treatment of protesters standing up and speaking up for racial justice at Lafayette Park. Perhaps the greatest lesson for our children and our nation is if you sow discontent and fear, you reap hatred and violence. We must continue to champion the power of education to end intolerance, disrupt systemic inequity, and create safe spaces for dialogue, unity, and growth," the statement reads.

Over the summer, people protested police brutality following the death of George Floyd, including in Washington, D.C. In June, about 5,000 members of the National Guard and 1,600 active duty troops were brought to the area ahead of the protests, according to a CBS report. The Associated Press reports that police had offers of federal help for three days prior to Wednesday's events.

In Monterey County, Monterey Peninsula Unified School District's Superintendent, PK Diffenbaugh, also issued a statement, reminding families that children are watching and need those around them.

They are watching one of the ugliest displays of anti-democratic and hateful behavior our country has seen in recent memory and they are watching how people in authority responded to these hateful rioters," he wrote. "Our young people are watching and they need us now more than ever. Not to give speeches or tell them what to think or how they should feel, but to listen to them. They need us to ask questions, to listen as they express their ideas and emotions, and to understand the pain they feel as a result of what they have witnessed and all they have been through during this past year."

Below are some of the resources shared by the school districts: