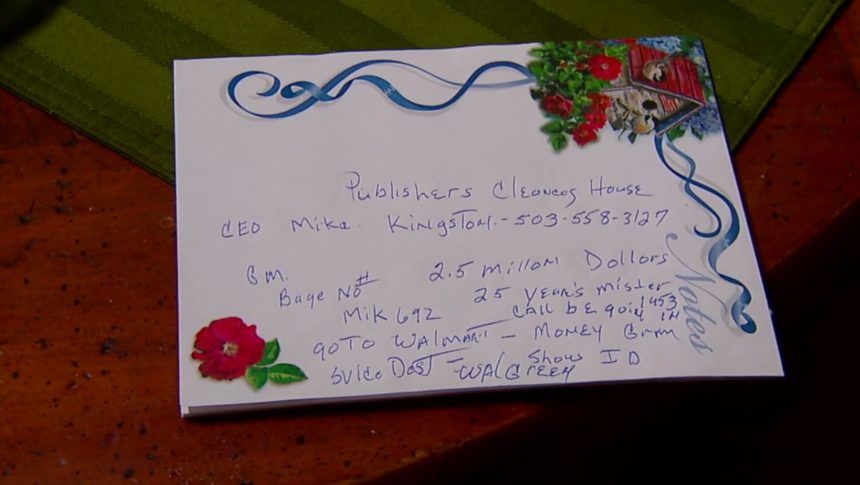 “You have to be aware and think a little bit smarter than the next person.”

“You have to be aware and think a little bit smarter than the next person,” said Guthrie, who was targeted a couple weeks ago by a scammer who claimed to work for Publisher’s Clearing House.

The caller told Guthrie she was “the second prize winner in our big sweepstakes for $2.5 million.

Guthrie had her doubts. “I’m not sending you no money, right off the bat I told them,” she said.

Guthrie started taking notes, keeping the caller on the line. Those notes show he gave her a badge number and told her to go to the nearest Walmart or Walgreens to prove her identity through MoneyGram.

“He kept trying to convince me that it wasn’t a scam and he kept saying, ‘oh I would not do anything to you like that. I used to be a minister,’” Guthrie recalled. “As soon as I hung up, I called Better Business Bureau.

“We do hear of this fairly often,” said Tim Maniscalo, of the Better Business Bureau of Central Indiana.

Maniscalo and his team at BBB confirmed Guthrie`s suspicions - it was definitely a scam and if Guthrie had gone to the store, she would've been told to wire money.

“All they have to get is one person every now and then to fall for it, and they've made money because they have no investment in this other than their time,” said Guthrie.

Guthrie tried to call the number she wrote down, but no one answered. She's glad she wasted the scammers time, and hopes others can learn from her experience.

Publishers Clearing House has even posted a warning on its website that says they will deliver your prize for free, with no strings attached.