SALINAS, Calif. (KION) A well-known Salinas ice cream vendor, also known as paletero in Spanish, is stuck in a difficult position–battling illness with no insurance or retirement savings. But the community is coming together to raise funds so he can pay the bills.

94-year-old Gabriel Salcedo sold snacks, popsicles and frozen treats up and down the streets of Salinas for more than 10 years.

“I have been working all my life. I haven’t died because of God,” Salcedo said.

Originally a farm worker, he had no choice but to pick up an ice cream cart in his 80s.

But when locals no longer saw this beloved ice cream man, known as Don Gabriel, pushing his cart around town, something seemed wrong.

It turns out, a respiratory disease put him in the hospital just last month, forcing him to stop working. With no retirement and no insurance, this left Salcedo in a difficult position.

He is not alone. According to a study by UnidosUS, 78 percent of Latino workers don’t have funds in a retirement account, leaving them vulnerable later in life.

“You don’t have enough money and so you’re forced to keep working and working and working until your body actually gives out on you," said Jennifer Brown, the associate director of economic policy with Unidos US. "Social security is not enough. It’s just not enough to get by. You have to have this extra savings.”

Latinos also face barriers in acquiring healthcare coverage; some deal with language barriers and others do not have citizenship status.

“Especially in our county, a huge population of the Latinos are undocumented and so there are only very limited resources they can get,” said Jesús Valenzuela with healthcare advocacy group, Building Healthy Communities.

Some residents who no longer qualify for low-income medical assistance, like Medi-Cal, don’t have the money to be able to purchase insurance elsewhere.

"The rents are so high, food is going up that they cannot afford the next step, which might be something like covered California,” Valenzuela said.

But those who don’t get health insurance soon may have to pay a penalty of $695 or more when they file their tax returns next year. It’s all part of a new 2020 state mandate requiring Californians to have coverage throughout the year.

But the community is coming together to save Salcedo from falling through the cracks, offering him food and even raising money to help him pay for his bills.

“He deserves this and more. Even though he doesn’t have a family, he deserves the support we give him,” said Genesis Politron who brings Salcedo food and is working to get him an ID.

Alejandra Bravo organized a GoFundMe for Salcedo so he doesn’t have to worry about his financial obligations and can focus on regaining his health.

“I am not the only one touched to see his determination to work and get ahead. Despite being 94, he is still motivated to be independent,” Bravo said.

So far, dozens of donors have helped raise more than $3,700 and they plan to keep going. Salcedo

“Our lives are worth fighting for,” Salcedo said.

The GoFundMe account for Don Gabriel is still collecting donations with Salcedo unable to return to work at this time.

If you would like to donate to the GoFundMe, click the following link to view the page: https://www.gofundme.com/f/don-gabriel-is-in-the-hospital/. 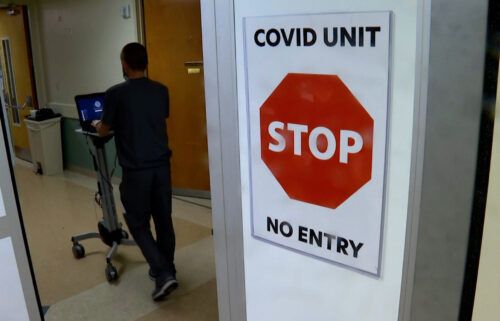