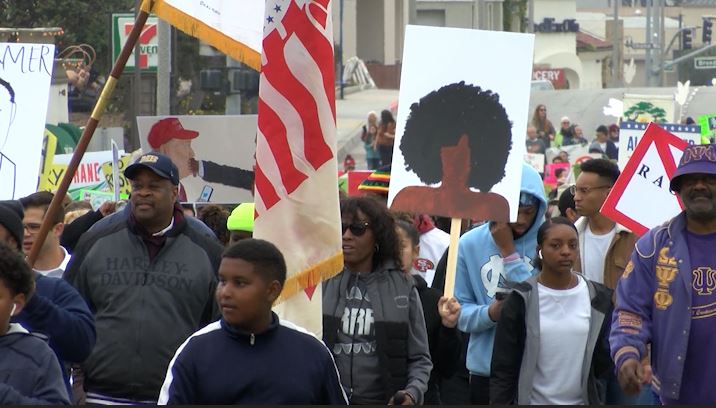 SEASIDE, Calif. (KION) - As many people around the country celebrate Martin Luther King Jr. Day, a march in Seaside to remember everything that Dr. King stood for.

"Dr. King loved everybody. He fought to make sure - and he did it in a non violent manner - he fought and protested to make sure we all treated each other equally," says Alice Jordan, the coordinator for the MLK Day march.

The message by Dr. King still rings true today, as we remember him.
King was killed more than 50 years ago on April 4, 1968.

"The love that he had and the action he took to make this happen is why we are here today and why the community is coming together," says Jordan.

A march Monday took over Fremont Street for a couple of hours.

"It is a day on and not a day off. It is a reminder of Dr. Martin Luther King's life as well as his achievements," says Joshua Cole who is a member of the Kappa Alpha Psi Fraternity.

"I believe that I have a dream... and things are wonderful and what he fought for peacefully came to be and we hope it stay that way," says Donna Cole, who is attending the parade for the first time after moving to the area more than eight years ago.

Dr. Martin Luther King has ties to Seaside, as he made a visit back in 1961 to Friendship Baptist Church to talk about the future of the civil rights movement.

Today, the community hopes he would be proud.

"I think Dr. King would say that you have some good news here - some things are happening. There's also some things we need to happen the bad news is that we have not come as far as we need to be right now," says Jordan.

The march wrapped up at The Oldemeyer Center in Seaside with continued remembrances.