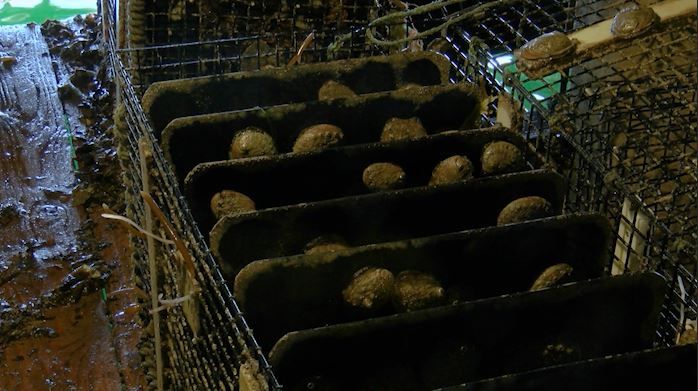 MONTEREY BAY, Calif. (KION) There are growing concerns about changes in our ocean water due to higher acidification levels… and a lower pH.

"So acidity is rising… we know that globally… and here in the California, current large marine ecosystem, we know that it's been both dropping and becoming more variable… along with changes in our global ecosystem," says MBARI Senior Research Specialist Steve Litvin who has been looking deeper into ocean acidification.

"There's been mixed results and actually we don't really know the direct effects on most species… and beyond that… we don't know much about how it will affect ecosystems as a whole," says Litvin.

What we do know is the higher than normal levels of acid in the water eat away at shells made from calcium carbonate. If marine life can't survive, environmentalists say the impacts will be grave.

For the Monterey Abalone Company, the survival of marine life is their biggest concern.

"One of the things that worries us immediately is kelp loss. we depend on kelp to run the business very direct impact on our business but also the untold millions of tons of kelp we've lost all the way up the coast to the north coast to the urchin problem is a big concern because the kelp acts as a buffer for ocean acidification," says Andrew Kim, the manager at Monterey Abalone Company.

Farmers like Andrew Kim are keeping a close eye on the abalone they grow.

"The farm here, we haven't noticed any big red flags and it would be more of a concern for our animals over at the hatchery and nursery because the affects of ocean acidification are much more pronounced and noticeable in larvae and juveniles so teeny tiny shell forming marine animals," Kim says.

Over in Moss Landing at the nursery, no threat so far has been seen there either.

Abalone - which is basically an ocean snail - is popular along California's coast and has been harvested for hundreds of years.

In 2018 Assembly Bill 2139 went into effect. It outlines the findings, recommendations, and actions to address ocean acidification. That same year, The State of California Ocean Acidification Action Plan" began, which prepares for possible risks and impacts.

Looking forward to the future, Scientists hope to have a better understanding of not just the direct impacts of ocean acidification on marine life, but also how the interactions between the animals, their environment, and each other will change the communities in the ocean.

"Its interesting because climate change isn't just ocean acidification its also changes in the oxygen levels in the ocean and of course global warming.. and one example we found in experiments we did on abalone reproduction success that while ocean acidification drop fertilization warming can actually raise it back up a little bit," Litvin concludes.

The efforts are raising some hope for healthy abalone and marine life for years to come.