SALINAS, Calif. (KION) Surfing brings thousands to the Central Coast every year, but for one Monterey County Sheriff’s deputy, it brought an unexpected friendship with a man he arrested over two decades ago.

When it comes to shredding waves, Sergeant Derrel Simpson and Gunter Hartman are the best of friends. But their relationship didn’t start out with a beautiful day on the water.

“The first time I met Gunter, I had arrested him. This was in the probably mid-90s,” said Sgt. Simpson.

Gunter was only a teenager then. He was doing drugs and stealing to support his habit, landing in the back of Sgt. Simpson’s patrol car more times than he cares to admit.

Gunter saw the deputy as his enemy, but surfing was a common love between them. The sergeant tried using that to prod Gunter into the right path.

“He just seemed like a young man that was lost,” said Derrel. “He didn’t have a lot of direction.”

But Derrel didn’t see him again for over 20 years until about a year ago out on the waters.

“This guy paddles up to me and he’s like, ‘Hey, do you know who I am?’” recalled Gunter.

“He goes, ‘Oh, I remember you, Simpson. You’re one of the reason I left Monterey...’” said Derrel.

Gunter had fallen into hard times out of state. He came home to find solace in the waves, and to his surprise, in Derrel’s constant support.

“I hear words of encouragement from him, which is really good because I wasn’t used to that.”

But it wasn’t until a dramatic emergency on the beach while Derrel was on patrol that their casual chats turned into a deeper friendship.

As Gunter was camped out in the sand dunes at the beach, he became very sick and knew he needed a doctor. But the was too ill to get himself anywhere.

So Gunter did something he never did: he started praying to God.

“I put it in His face and I said, ‘You know, if you’re actually listening, please I need some help,’” he recalled.

“I was at work and driving around that area. It just impressed upon me.. you need to go check on Gunter. Can’t really tell you why,” said Derrel.

So the sergeant decided to look through the sand dunes, a large area. But he says he didn’t walk a hundred yards before coming across Gunter.

“He comes out of his tent, he’s got tears in his eyes, he’s pretty emotional,” said Derrel.

“And before I could finish my prayer, I hear somebody go, ‘Hey Gunter!’  And I started freaking out,” recalled Gunter. “I looked outside my tent and I see it’s Sergeant Simpson.”

It is still something both regard as a miracle.

Derrel - a churchgoer at First Baptist Church in Salinas - takes Gunter with him every Sunday now, after surfing in the morning, of course.

Gunter is back in school studying construction management, with a steady job and even a boat. Most importantly, he’s making good choices and more doors are opening for him every day.

All thanks to an unlikely friendship.

“God’s plan was I received possibly a greater gift than what I thought I was giving Gunter,” said Derrel.

“You know, I never thought in a million years that my best friend would be a sheriff,” said Gunter. 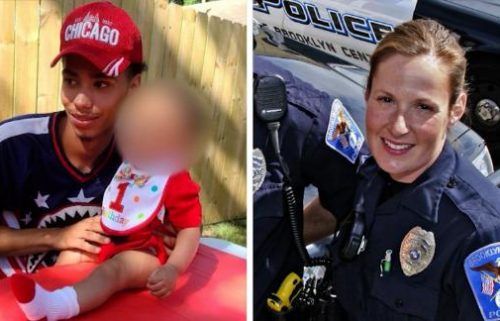