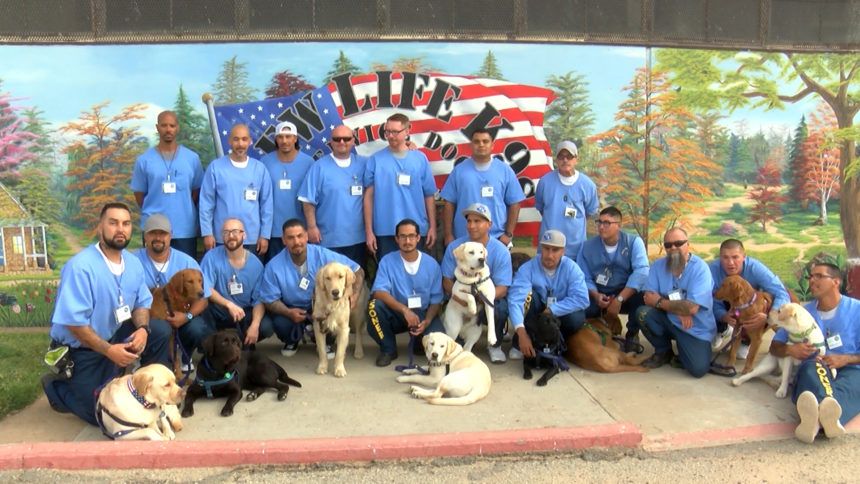 This holiday, local inmates are giving thanks for a gift that comes on four legs.

We spent a day at the Correctional Training facility in Soledad getting to know a group whose mission is "saving lives through the healing power of the human-canine bond."

They say they’re man’s best friend. But at this prison in Soledad, dogs are so much more than that.

“I came to this program because honestly, I wanted to take a positive risk. So many negative risks in my past life and it was a way to give back and I knew ultimately the dogs could give me what I feel I’ve never received in my life, was unconditional love. And they were absolutely able to do that,” says inmate Timothy Galvan.

These incarcerated men teach the dogs to be service animals for people like retired police officers, or veterans with PTSD.

“We give them a choice and that’s built on love. And so we form that bond and ultimately give them love and praise them no matter what and so doing this type of education helps us because we get to grow ourselves and we get to learn from not only our mistakes but realizing it’s just a dog and don’t take it personal, it’s going to be alright,” says Galvan.

From closing and opening doors, to turning on a light switch, to what's called "bracing, where the dog is the help a person uses to stand up, these dogs learn to assist people with basic life skills.

Greg Gallo knows the need for these dogs first-hand.

“Before him, I had a lot of severe symptoms of PTSD and so I wasn’t going out, I wasn’t spending time with family and friends…just isolating myself at home and when i did go out I’d get flashbacks or triggers and at home I was having nightmares at night,” says Gallo.

Eddie changed Gallo’s life so much…he has become a full time volunteer for the program.

It didn’t bother him inmates trained these dogs. What mattered were the positive changes the dogs have had on the prisoners.

“A lot of these guys went in at 15 years old and they were in gangs at the time, they had bad home lives and stuff like that, so they had no idea how to love, they never learned and now they get a dog which just loves unconditionally, better than any human could and so they learn a lot from it.”

“Puppy raisers” are also a huge part of what makes the program a success. From San Luis Obispo County to Monterey County, volunteers from the public take the dogs outside of the prison to allow them to socialize and expose them to different sights, smells and situations.

And there is a huge need for puppy raisers right now.

Correctional Sergeant Robbie Gregory has actually taken on the task herself.

"These guys are able to give back…it puts a big fulfillment in their hearts and we have veterans and first responders out there that…if they have a dog, they can make it! There are so many people out there that commit suicide because they get such a low and if one of these K9s, even if they’re just a companion…can help them make it through the whole entire day and for the rest of their life, who wouldn’t want to do this? It’s great.”

Once the dogs are ready, they have a graduation ceremony and though the trainers say it’s hard to let go…

“It’s worth it in the end and ultimately they’re doing more for us that we’re doing for them. They’re allowing us to feel human again where before because we come from various backgrounds, different walks of life and it’s traumatizing, so this is the chance for us to be who we were truly meant to be. Be able to build our own self-esteem, be able to just…smile and even though yes we’re in prison, being a part of this program..it’s like you’re not even in prison,” says Galvan.

This program is also something special for men constantly judged for their past. These dogs don’t care about the men’s criminal history, they just want to love and be loved.

New life K9s runs solely off donations and grants and the recipient is given the dog for free, so they are always looking for help.

Right now, they are in dire need of those puppy raisers. If this is something that interests you, you can find more info here: https://www.newlifek9s.org/