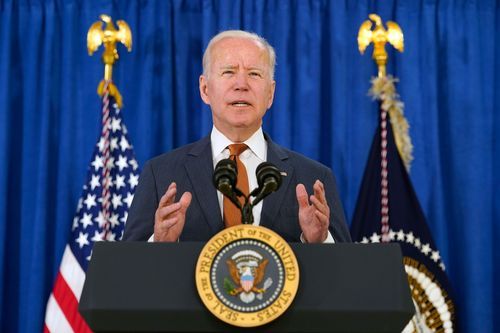 President Joe Biden on Friday rejected a new counteroffer made by Republicans on infrastructure despite a $50 billion increase in spending, telling the GOP’s key negotiator that the new offer did not meet his policy goals.

And as the talks between Senate Republicans led by West Virginia’s Shelley Moore Capito and the White House hit a wall, a bipartisan group of senators could emerge as the next key negotiating partners with Biden on infrastructure. Whether they can reach a deal remains to be seen but the group has been working on a proposal that it could unveil as soon as next week, according to sources familiar with the effort.

Capito presented the new Republican counteroffer on infrastructure, “which consisted of an about $50 billion increase in spending across a number of infrastructure programs,” according to the readout from White House press secretary Jen Psaki. Psaki said the President felt the offer “did not meet his objectives.”

“The President expressed his gratitude for her effort and goodwill, but also indicated that the current offer did not meet his objectives to grow the economy, tackle the climate crisis, and create new jobs,” the readout stated in part.

Ahead of Friday’s meeting, multiple GOP sources had said anything put on the table would still remain far apart from where Biden sits. “There aren’t GOP votes for what he put on the table, and the White House knows that,” one GOP source told CNN.

The White House indicated that Biden will continue to negotiate with senators on both sides of the aisle to reach a deal on the package. Biden and Capito planned to speak again on Monday.

Some Democrats have cast doubt on whether Biden should continue to negotiate with Republicans as the talks draw on and the two sides remain miles apart. Rep. Jamaal Bowman, a New York Democrat who’s a leading progressive in the House, accused Republicans on Friday of operating in bad faith.

“I question why we are even deciding to negotiate with the Republicans,” he told CNN’s Erin Burnett on “Erin Burnett OutFront,” adding, “I understand wanting to engage in bipartisanship, but they have not negotiated with us and tried to engage with us in good faith since this session has begun.”

He pointed to the 2022 midterm elections as a reason to pass with bill with only Democratic votes, asserting that “as Democrats, we have to deliver — that is how we win the midterms next year, not negotiating with Republicans who do not want to negotiate in good faith.”

Biden and Capito, who is leading infrastructure negotiations on behalf of Senate Republicans, have been in touch frequently since the President proposed a comprehensive infrastructure plan.

Earlier this week at an in-person meeting at the White House with Capito, the President offered to bring his price tag on an infrastructure package down to $1 trillion but wanted to ensure it amounts to “new money” — not redirected from funding already approved by Congress as Senate Republicans have been demanding, a GOP source briefed on the talks said. At the time, Biden also reiterated his call for new taxes to pay for much of his plan, the source said. But this latest effort marked the first concrete proposal that would take into account the firmest Republican red line: changes to the 2017 tax law.

“The President also spoke to Chairman DeFazio to thank him for all his hard work on key elements of the American Jobs Plan, and to offer his support for the Committee mark-up that Chairman DeFazio will begin on Wednesday,” Psaki’s statement on Biden’s call with DeFazio read. “The President and Chairman DeFazio agreed on the benefits of continued engagement with Democratic and Republican Senators as the House work on infrastructure advances this coming week.”

A spokesperson for DeFazio said the call “was very positive” and that the President “congratulated DeFazio on the introduction of the INVEST in America Act,” a ground transportation bill his office says would carry out some of the key goals in Biden’s infrastructure plan.

Ahead of Friday’s calls with Capito and DeFazio, Psaki maintained that there is “still runway left” for a bipartisan agreement on infrastructure after negotiations passed the White House’s Memorial Day deadline for significant progress, but said that runway is “not unlimited.”

“There are some realities of timelines, including the fact that Congressman DeFazio is leading the markup of key components at the American Jobs Plan next week, key infrastructure components where there is a big overlap. There’s a lot of interest and excitement by many Democrats in Congress about that. So it’s not unlimited, but we have an opportunity, we’re going to see how those conversations go,” she said during Friday’s press briefing.

This story has been updated with further developments Friday.