Stars Jeff Goldblum and Kyle MacLachlan made surprise appearances at men’s fashion week in Milan, with both walking the runway for Prada on Sunday.

They were among 10 Hollywood actors invited by the Italian fashion giant to showcase its Fall-Winter 2022 menswear collection, which offered a futuristic vision of workplace attire.

The cameos marked an upbeat note to a fashion week that has seen several labels — including Milan regular, Armani — cancel shows or revert to digital-only presentations amid a surge in Covid-19 cases across Europe. Last week, Italy recorded its highest daily figure for infections since the start of the pandemic, with over 220,000 new cases reported on Tuesday.

But Prada went ahead with its show at the Fondazione Prada complex, sending models down a sci-fi-inspired tunnel towards the zig zag runway.

First to appear was “Twin Peaks” and “Sex and the City” star Kyle MacLachlan, who wore a long coat over powder blue pants and shirt with matching gloves. He later took to Twitter to thank Prada’s co-creative director Raf Simons, calling the opportunity to open the show “an honor.”

An array of structured silhouettes and elevated fashion staples followed, with wide-shouldered blazers, leather jackets and parkas worn over silky overalls or paired with space-age backpacks.

Two years into their partnership, Simons and co-creative director Miuccia Prada merged formal tailoring with elevated workwear to create what the brand called “uniforms of reality, rematerialized in precious leather and silk tech as a mark of respect and value.”

Describing actors as “interpreters of reality, employed to echo truth through their portrayals,” the label also invited several other well-known Hollywood figures to model at the presentation. Ashton Sanders, from the Oscar-winning movie “Moonlight,” and “The Queen’s Gambit” star Thomas Brodie-Sangster were among the celebrities appearing in Sunday’s show.

Goldblum, who is known for wearing colorful Prada items — including the flame-print shirt he famously sported on “Jimmy Kimmel Live!” in 2018 — was the last to walk. The 69-year-old appeared in an all-black outfit including a dark overcoat with mohair trim and sleeves.

Top image: Jeff Goldblum walks the runway at the Fondazione Prada on Sunday. 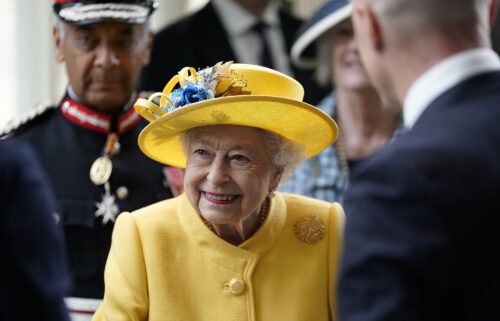