An intense heat wave will blanket much of the West this week, prompting officials in California to urge residents to slash their energy consumption for the second day in a row to avoid straining the electrical grid.

The California Independent System Operator — which manages 80% of the state’s grid — extended what is known as a Flex Alert, urging residents to curtail electricity use between the hours of 4 p.m. and 9 p.m. through at least Thursday.

The operator also suggested residents pre-cool their homes at 72 degrees Fahrenheit before 4 p.m. and then set their thermostats to 78 degrees or higher during conservation hours. Residents should also avoid charging electric vehicles or using large appliances, it said.

“More Flex Alerts are likely to be issued through the holiday weekend, as excessive heat is forecast to blanket most of California,” the operator warned in a news release Wednesday.

The burden on the grid increases during the late afternoon hours as air conditioner use goes up while the supply provided by solar energy declines, according to the power grid manager.

Over 40 million people are under excessive heat alerts across seven states in the West through Labor Day weekend, including densely populated cities such as San Francisco and Los Angeles.

“This will be the longest and most intense heat streak so far this calendar year,” Alexis Clouser from the National Weather Service in San Francisco told CNN.

And that’s notable because the West has already endured extremely high temperatures this summer, which have exacerbated the region’s drought that has been linked by experts to human-caused climate change.

California’s grid will be limited in its ability to import power because neighboring states are anticipating high temperatures, the operator said.

“We’re monitoring for any potential energy supply shortfalls, and changes in conditions, such as wildfires or generation or transmission outages, that would impact supplies or the grid,” it said in an email.

Gov. Gavin Newsom has issued a state of emergency for California.

“We are anticipating this extreme heat to be a length in duration the likes of which we haven’t experienced in some time,” he said during a news conference.

Labor Day is anticipated to be the hottest day during this persistent heat wave, with other days expected to see temperatures soar 15 to 20 degrees Fahrenheit above normal.

‘This is a deadly heat’

Other states affected include most of Nevada, parts of Arizona, Idaho, Utah, Oregon and Washington state, according to CNN Robert Shackelford.

Temperatures could be as high as 116 degrees in areas under excessive heat warnings and up to 105 degrees in the heat advisories, he noted.

Heat advisories are in place for Boise, Idaho; Reno, Nevada; and Seattle.

Cities including Los Angeles, San Diego, Palm Springs, Fresno, San Francisco, Sacramento and Redding in California are under excessive heat warnings — though not all are expected to see temperatures up to 116, Shackelford said.

In California, the state of emergency will allow power plants to generate additional energy and greenlights the usage of backup generators to reduce the energy used during peak hours, according to the governor’s office. It also permits ships to reduce their grid energy use.

“On a supply side, we are challenged by these extremes, and on the demand side, not surprisingly, people are turning up the AC,” Newsom explained. “People are understandably trying to escape the heat, so we have to address that twin challenge anew.”

In the meantime, forecasters are warning people to take the extreme heat seriously because it can be life-threatening.

“This is a deadly heat, so use common sense,” Joe Sirard from the National Weather Service in Los Angeles said. “Some people don’t pay close enough attention to the forecast and they can get themselves in danger and die because of it. Obviously, it’s a very sad thing to talk about, but people need to be aware that heat can be deadly.”

Excessive heat is the leading cause of weather-related deaths in the US, and the conditions climate change imposes have been making extreme weather events more deadly and more common.

In fact, heat deaths have outpaced hurricane deaths by more than 15-to-1 over the past decade, according to data tracked by the National Weather Service. 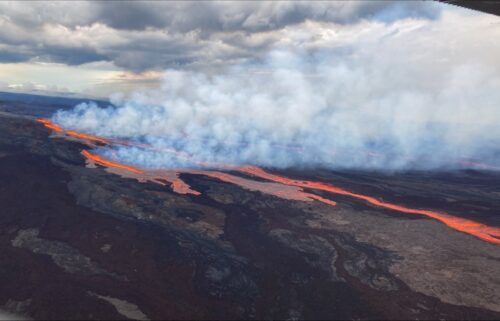