The votes are in. The Cincinnati Zoo’s bouncing baby hippo is named Fritz.

Choosing the name of Fiona’s little brother, born August 3, was a group effort.

The zoo received more than 90,000 name suggestions from members of the public in every US state and more than 60 countries, according to a press release from the zoo.

Two finalist names were chosen by the zoo before opening it up to a vote. The finalists were Fritz and Ferguson. Fritz raked in 56% of the more than 223,000 votes, the zoo said.

“We would have been happy with either name, but we really think the name Fritz fits this spunky little guy’s personality,” said Cincinnati Zoo’s head hippo keeper Wendy Rice. “We also thought it was funny that it was suggested because ‘Fritz’ is here due to Bibi’s birth control being ‘on the fritz.'”

A dose of birth control that had previously been effective for Bibi did not prevent this pregnancy, the zoo said when the pregnancy was announced.

“Most forms of contraception, in hippos or humans, (are) not 100% reliable,” said Christina Gorsuch, Cincinnati Zoo’s director of animal care.

Bibi the hippo gave birth August 3 to her calf, who is the younger sibling of Fiona, who became an international celebrity after being born six weeks prematurely in 2017. Several days after the new arrival’s birth, the zoo announced that it was a boy.

“We’re just happy that the calf is healthy. The sex didn’t matter much to the hippo team, but it will be interesting to observe and compare the behavioral differences between a hand-raised girl and a mom-raised boy,” Gorsuch said in a statement.

“Will this calf be as comfortable with humans as Fiona is? Will he be less independent? Will he love cameras?”

Fiona’s weight was a record-breaking low weight for a hippo, but she managed to survive with a lot of human help from the zoo’s care team. Fiona now weighs about 1,300 pounds.

“This calf looks huge to us because Fiona, Bibi’s first baby, only weighed 29 pounds when she was born six weeks premature and wasn’t able to stand on her own,” Gorsuch said. “This new calf weighs at least twice as much as Fiona did and is already walking,” the zoo said several days after the new calf was born. 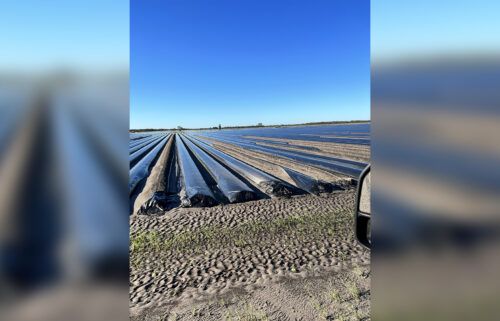