Air Quality Report (As of 11:30am)Good to moderate for all reporting areas,Weather Story:A ridge of high pressure will continue to dominate the…

Air Quality Report (As of 12PM)
All reporting stations are good.

Changes are coming to the weather this weekend! An area of low pressure, which has been part of a blocking pattern over the Pacific, will finally move through our area over the next couple of days. It is being drawn in by a deep and broad trough of low pressure over the Northern Rockies. The low moving by will keep temperatures cool through the weekend. As the larger trough to our east continues to dig southward, the weather pattern will amplify with a big ridge of high pressure to our west. We’ll be stuck right between these two features in northerly flow. At the surface, a frontal boundary reinforced by dense, cool, and very dry air will crash southward through the Sacramento Valley. It will find an outlet via the San Francisco/Monterey Bay areas with gusty winds expected as this dense air pours out into the ocean. The extreme dryness, coupled with gusty winds will lead to critical fire danger starting Sunday night and lasting through Monday. Under a dry air mass next week, high temperatures will warm up but lows will cool down.

Sunday: After morning clouds, breaking to mostly sunny late in the day as northerly winds increase over the hills. Slightly cool with coastal highs in the 60s and 60s to mid-70s inland. Gusty winds pick up over the hills late.

HUMIDITY: 5-15% with little recovery at night.

Any fires that develop will likely spread rapidly. A Red Flag Warning means that critical fire weather conditions are either occurring now or will shortly. A combination of strong winds, low relative humidity, and warm temperatures can contribute to extreme fire behavior.

**Wind Advisory**
From the National Weather Service in Monterey…
… for Santa Cruz & Santa Clara Counties from 4PM Sunday through 11AM Monday.

Damaging winds could blow down trees and power lines. Widespread power outages are possible. Travel could be difficult, especially for high profile vehicles.

In addition to fire weather concerns these winds will have the potential to bring down fire weakened trees and branches across the region. Any temporary structures such as tents and scaffolding will be compromised.
This event has the the potential to be as strong or stronger as winds during the 2017 Wine Country Fires with widespread potential for damaging winds throughout the Bay Area Sunday night.

Monitor the latest forecasts and warnings for updates on this situation. Fasten loose objects or shelter objects in a safe location prior to the onset of winds.

Overnight: Clear and dry with gusty winds over the hills, especially in the north. Wind gusts may occasionally mix down into the lower elevations. Mild, with lows in the 50s on the coast and 40s-50s inland.

Extended: Offshore winds will be gusty at times Monday before tapering off. Clear skies expected Monday/Tuesday with mild highs and chilly lows. Highs will warm up through mid-week while lows remain cool… mainly 30s-40s. Some cloudcover possible after mid-week.

-Area drought status: Moderate drought for much of Santa Cruz & Santa Clara Counties, Abnormally dry on the east shore of the bay into San Benito County. No drought classification for much of Monterey County outside of the Gabilan Range. 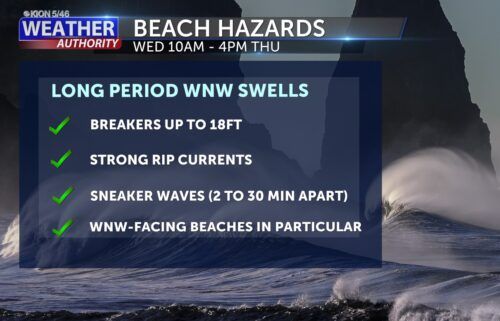