WEATHER STORY Offshore flow will be prominent as a ridge of high pressure builds into the region. This will modify the current air mass, drying it out. Expect a steady increase in daytime highs for the next few days, and cooler nights for the next week. The high pressure ridge will block weather systems… Continue Reading

High pressure will strengthen over us into the weekend, sending temperatures upward. Most areas will see their warmest readings on Friday with a few spots in the south seeing theirs on Saturday. A powerful trough of low pressure will then drop in over the Western U.S. While we’ll be on the dry side of it, a few isolated showers may be possible on Sunday as the associated cold front passes through. The bigger impacts will be gusty winds and chilly temperatures, however. In fact, morning lows Monday and especially Tuesday will be very frosty!! Some temperatures recovery expected through mid-week.

A long period northwest swell will move through the waters today and impact the coast into Friday morning. The greatest risk for sneaker waves, rip currents, and longshore currents along the coast will occur this afternoon through tonight. Additionally, breaking wave heights of 15 to 22 feet will be possible at favored locations along the shore. The swell will begin to decrease tonight, but breaking wave heights up to 12 to 20 feet will remain possible through Friday morning.

Rip currents can pull swimmers and surfers out to sea. Sneaker waves can knock unsuspecting beach goers over and into the sea.

Remain out of the water due to dangerous surf conditions, or stay near occupied lifeguard towers. Swimmers should avoid swimming in areas of large shore break. Rock jetties can be deadly in such conditions, stay off the rocks.

If caught in a rip current, relax and float. Don`t swim against the current. If able, swim in a direction following the shoreline. If unable to escape, face the shore and call or wave for help.

Overnight: Partly cloudy with a few, thin high clouds and patchy low clouds and fog around the coast and adjacent valleys. Expect coastal lows in the low to mid 40s with 30s to low 40s inland. Breezy northerly winds over the ridgetops at times.

Friday: Mostly sunny and much warmer with mid 60s to low 70s on the coast and low to mid 70s inland.

Saturday: Mostly sunny, but a bit cooler in the north and on the coast with highs mainly in the 60s, however southern inland areas will likely remain in the 70s.

Extended: A cold front will pass on Sunday with chilly, windy conditions behind it. An isolated rain shower or two will be possible, but rain will not be widespread. Highs will drop into the 50s for most areas Sunday through Wednesday and lows will be very chilly Monday through Wednesday mornings. Plan for frost, even up to coastal cities!. Appreciable rainfall looks to be at least two weeks out.

The outlook from the Climate Prediction Center for February 7th – 13th calls for the likelihood of BELOW normal temperatures and BELOW normal precipitation. 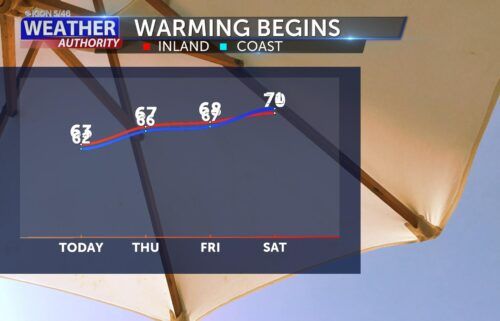 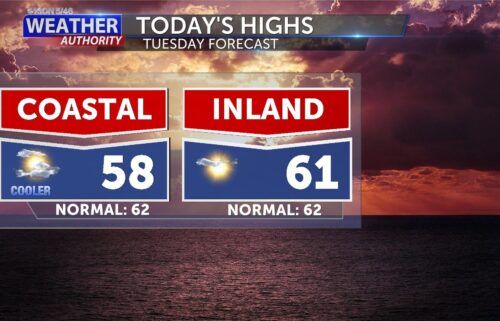