WEATHER STORYBy late Wednesday afternoon, the radar had already detected powerful storm cells in and around the San Antonio Valley. The storms proceeded to grow in both size and strength, moving through King City and then northward along HWY 101 and through the hills of San Benito County. Numerous lightning strikes were detected, as… Continue Reading

Temperatures will gradually warm this week, as high pressure builds in over the Eastern Pacific and West Coast.

In response to the changing air pressure, strong northwesterly winds will develop Tuesday. The onshore flow will keep exposed coastal areas a bit cool and gusty on Tuesday and probably into Wednesday.

On average, highs will likely be above normal Wednesday through the weekend.

Tuesday: A few low clouds near the coast, otherwise mostly sunny with a few high clouds. Expect coastal highs in the upper 50s to low 70s—warmest on the north side of the bay—and upper 60s to mid 70s inland. Gusty northwest winds at times.

***GALE WARNING***
… for the near coastal waters of Monterey County outside of Monterey Bay from 9AM Tuesday through 6PM Wednesday.

Strong winds can cause hazardous seas which could capsize or damage vessels and reduce visibility.

Wednesday: Patchy low clouds on the coast, otherwise mostly sunny. Breezy northwest wins will continue, which will temper warming on the south side of the bay, however just above everywhere else will see above normal high temperatures. Expect low 60s to mid 70s on the coast and 70s to low 80s inland.

Extended: Skies will stay mostly sunny to partly cloudy all the way into the weekend with occasionally breezy conditions on the coast and warmer than normal temperatures. Highs will likely peak on Friday at about 10ºF above normal, then slowly cool out of the weekend.

The outlook from the Climate Prediction Center for April 28th – May 4th calls for the likelihood of ABOVE normal temperatures and BELOW normal precipitation. 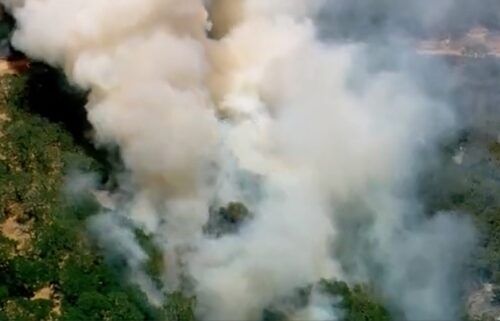