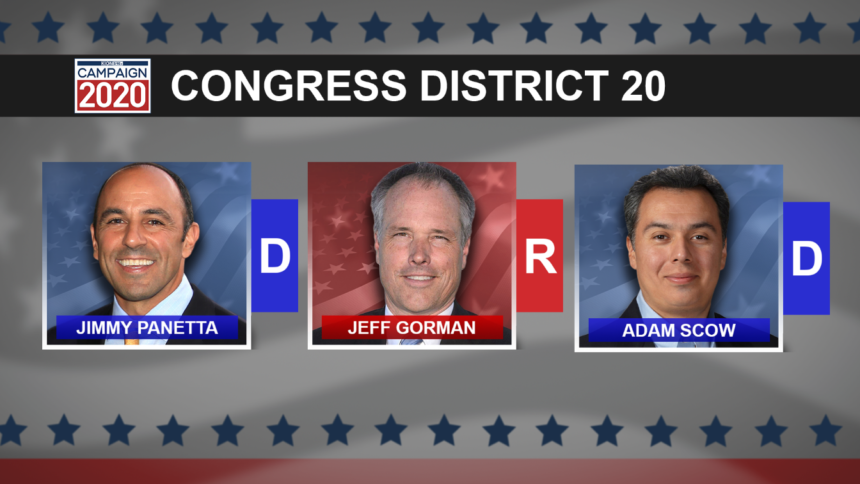 The district covers all of Monterey and San Benito counties, along with parts of Santa Cruz County (including the cities of Santa Cruz and Watsonville) and a small section of Santa Clara County, which includes a large chunk of the City of Gilroy.

In 2020, Panetta is being challenged on both sides of the political spectrum. Environmental and community advocate Adam Scow is running to Panetta’s left. He says that Panetta’s method of working across the aisle does not lead to the progressive changes he believes the country needs.

“Maybe you got a bill passed, but is it actually helping the people here,” Scow tells KION.

Jeff Gorman is the current Chairman of the Monterey County Republican Party. He says that Democrats have had enough time representing California and new leadership is needed.

“What’s democracy without the alternatives? We’ve had a one-party state in California and we need to fix it up.”

“There are people out there who run for office who just like to yell, who like to say things, [and] who like to complain. It is representatives that actually put forward a plan who I think deserve to be in office,” Panetta says.

The two-term Democrat points to his Farm Workforce Modernization Act as his big, recent achievement. Under the bill, through years of continued farm work in the United States, workers will have the ability to earn legal status. The bill passed through the Democrat-majority House with bipartisan support, but has not passed the Senate.

Panetta says the bill “protects our existing farmworkers who contribute to our number one industry, agriculture, and streamlines the H2A Visa process so that we can have an enduring agricultural workforce.” He adds, “Democrats, Republicans, farmers and farmworkers [spent] eight months grinding away at that legislation.”

Scow, however, criticizes the bill’s requirement for years of continued work and the process required to go through the program, and says instead there should be sweeping legislation.

Panetta pushes back on the notion that his focus on immigration is too narrow, pointing to his bills that support citizenship or legal status for DACA recipients and people with Temporary Protected Status. He says the house did its job by passing multiple bills on the issue and now the Senate and White House need to do theirs.

On the topic of bipartisanship, Panetta argues that is how things get done in Washington. “I have a couple opponents who say ‘you’re too bipartisan,’ well that’s too bad. I will continue to be because I know that I will work with the ones who will help me get things done.”

That’s why Panetta says his environmental policy is the right choice. He put forward the Climate Action Rebate Act for a full move to renewable energy in the U.S. by 2050. This would be done through a carbon tax to incentive companies to change their business plan.

“This is not for the faint of heart. This is a fight with the fossil fuel industry. The fossil fuel industry is more interested in their short term profits than the health of our planet… if a corporate compromise with oil and gas is going to solve the climate crisis, OK, but it’s not,” Scow says.

Panetta argued, “If there is a reasonable way to get things done by 2030, we’re all for it. But there needs to be a practical way to do that and now affect families that will lose their jobs,” adding “my Climate Action Rebate plan actually is a plan, is realistic and helps people It doesn’t just hurt them. It helps. Then, and most importantly, it helps our environment,” Panetta pushes back.

Gorman takes the opposite approach. He says that California has too many regulations which get in the way of the state benefiting from the Trump Administration’s effort to boost the economy and resources, like oil, we have on the Central Coast.

“I think people under-appreciate how important Monterey County energy production has been for 70-80 years and how very safe it has been, their great track record, and the employment and revenues they pay to the county. I think environmental zealots banned fracking. I think that was a poor choice.”

He also says that money in current efforts toward renewables are going into the wrong pockets.

“Government mandates and government subsides aren’t really the best and most idyllic. I love the Tesla car, but it’s expensive and it’s mostly people getting the subsidies who have a lot of money already.”

It is on that note that Gorman believes there are simply too many laws on the books, and that is what is holding the population back.

“I think the number of bills should be reduced massively. The promises of government can’t be fulfilled at the rate Democrats are making them,” Gorman says.

Scow and Panetta both agree that it is the federal government’s responsibility to step in with California’s homelessness and affordable housing issues.

Scow says what is current in place isn’t working. “[We need] a massive increase to the federal Affordable Housing Trust Fund. We need to be fully funding section 8. It is time to being HUD back into the housing business. We have an inadequate voucher system. People are on waitlists in Monterey and Santa Cruz County. People can’t get the money they need to pay the rest.”

Where Gorman does want to step in is with water.

“I’d like to see what the federal government can do. I know Mr. Trump was here talking that up for farmers in the Central valley. I know it’s a very important issue for Salinas farmers. And here on the Peninsula, we’ve lived with drought more often than not over the last 20 years. And the water district was formed and trying to provide more water for 40 years with no success. So I hope very much to encourage water production and water storage here that helps us enjoy a better quality of life.”