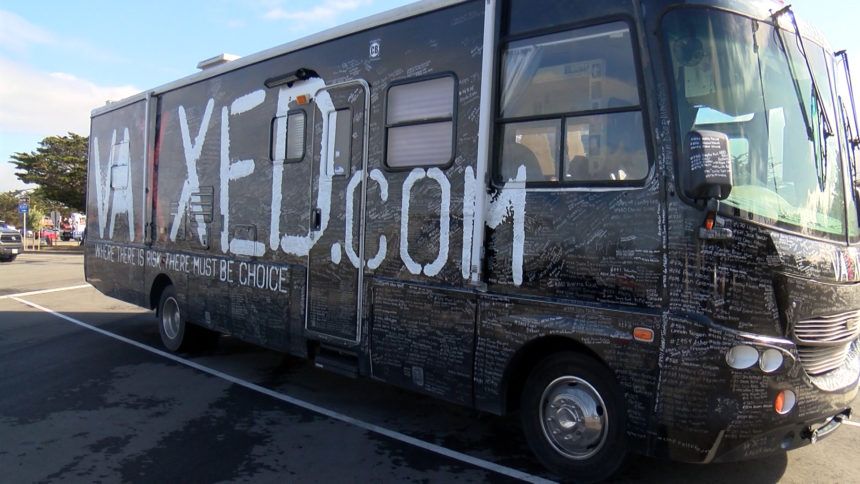 MONTEREY, Calif. (KION) Carina Powers signed her daughter’s name on the side of large bus in Monterey, Thursday. It’s now one of the hundreds of signatures made by parents who said their child has been injured or died as a result of a vaccine.

The signature is something Powers said she was willing to do in order to spread the word about the, what she called, the dark side of vaccines. Powers said her daughter was a perfectly healthy baby until receiving a Hepatitis B shot. "She wasn't waking up. She was very lethargic. Her eyes were rolling back. That's when I called my pediatrician. I had to run to the emergency room. Once in the emergency room, she stayed in the NICU for seven days,” said Powers.

That would be the last vaccine Powers said her daughter would ever receive.

Other parents have also taken the pledge not to vaccinate their children. "They're full of toxins. They're untested. We're unwilling to have our kids be the guinea pigs for these experiments,” said parent, Agatha Kenar.

As of last year, California law mandates that children, grades K-12, be vaccinated. What is known as the Vaxxed Bus, and the families behind it, want to see that law change.

"I'm a lawyer. My husband is a nurse. If these mandates don't go away we are leaving the state,” said Kenar.

Assistant Director of Public Health, Kristy Michie, said there is evidence that shows vaccines are the best way doctors can prevent diseases in children and adults. “Vaccines are very effective at preventing severe outcomes from some illnesses like measles, flu, mumps, and others,” said Michie.