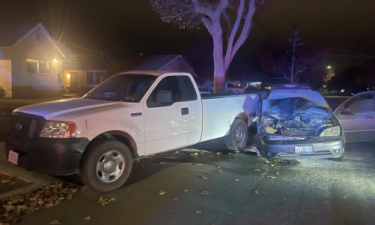 A Washington state sheriff who allegedly tailed a Black man delivering newspapers falsely accused the man of threatening his life, summoning dozens of officers to the scene to apprehend him, prosecutors said Tuesday.

Pierce County Sheriff Ed Troyer was charged with one count of false reporting and one count of making a false or misleading statement to a public servant in connection with the incident, state Attorney General Bob Ferguson’s office said in a Tuesday news release. Ferguson filed the charges in Pierce County District Court.

After the charges were filed, Troyer told CNN in a statement the attorney general told the media about the charges before he informed Troyer or Troyer’s attorney and “the night of the incident, I was doing what I have done for decades — investigate the possibility of criminal activity after neighbors and I had repeatedly become victims of property crime.” He said he believes the charges are politically motivated.

Gov. Jay Inslee announced in April he had instructed the attorney general to investigate, calling initial reports of the incident “very concerning.”

The charges stem from a January 27 incident during which Troyer encountered Sedrick Altheimer while he was out delivering newspapers, according to a declaration for determination of probable cause filed by Ferguson’s office.

In January, Altheimer would usually begin his shift around midnight and finish deliveries around 3 a.m., it added. He told investigators while working early January 27, he noticed “a white SUV appeared to be following him,” which police reports and body cam footage later showed was Troyer, according to the declaration.

Altheimer eventually pulled into a driveway to drop a newspaper at a house and decided to approach the SUV to ask why he was being followed, the declaration said. He asked Troyer if he was a police officer and asked if he was following him “because I’m Black?” according to the declaration.

Troyer, who did not identify himself as the sheriff or a law enforcement officer, allegedly told Altheimer his wife was Black and began to question him and accuse him of being a thief, according to the declaration.

Altheimer got back in his car and drove away and after Troyer began following him again, he turned around, stopped his vehicle in the middle of a street facing Troyer’s approaching vehicle and began taking pictures of it, the declaration stated.

The attorney general alleges Troyer called the “officer line” of the county’s 911 dispatch desk and said he “caught someone in my driveway who just threatened to kill me.” The dispatcher handled the call with the highest priority, and more than 40 law enforcement officers began rushing to the scene, according to the declaration.

When the first officers arrived and saw the two cars parked in the middle of the street, they informed the dispatcher they did not need so many units to come. Altheimer informed officers Troyer was following him, the declaration noted.

Troyer told another officer Altheimer never threatened him and he did not see any weapons, and later added he should be let go if he was a newspaper carrier, according to the declaration.

“The State of Washington criminal charges against Sheriff Troyer are well deserved,” Altheimer’s attorney, Susan Mindenbergs, said in a statement to CNN. “It is miraculous that Mr. Altheimer survived the ordeal.”

Altheimer filed a claim for damages of at least $5 million against the county in June. Altheimer’s attorneys said in the filing the incident caused him “severe emotional distress.” Pierce County is not commenting on the pending litigation.

When asked about Troyer’s current status, the Pierce County Sheriff’s Department provided this statement: “Sheriff Troyer remains the elected Sheriff in full lawful authority and is presumed innocent until proven guilty. The Sheriff has instructed his command staff, and the entire Pierce County Sheriff’s Department to continue in its mission and to fulfill their duties without interruption or distraction.”