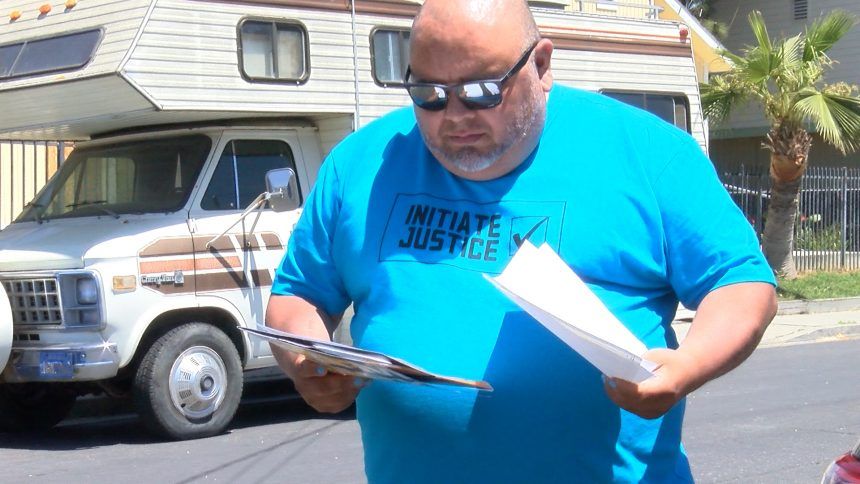 WATSONVILLE, Calif. (KION) Recent Cabrillo College graduate and former homeless person, Tomas Alejandrez from Watsonville, says a kind gesture during his darkest times that helped him get on the path to success came from an unlikely place.

He comes from a lifetime of drug abuse and poverty but says it was during his time panhandling on the streets of Fresno County that he was approached by man who offered him a cup of coffee and spent some time with him. That man turned out to be former Detroit Lions linebacker, Zack Follett.

After years apart and weeks of trying to track him down, Alejandrez finally got his chance to thank Follett.

Alejandrez says his addiction to drugs started early on and led to him being on the streets. After sleeping by dumpsters, being assaulted by other homeless individuals, nearly landing himself behind bars and even finding out he is HIV positive, Alejandrez says he never thought his life would change for the better. It was ultimately his father, Monico Alejandrez, who took him off the streets and pushed for him to get into treatment and on to college.

However, Follett also played a role. Follett tells KION he was driving through the streets of Fresno one day when he spotted a homeless man standing alone with a cardboard sign. He returned the next day offering him a drink and thus, Alejandrez and Follett began sharing their stories with each other.

“It brings tears to my eyes when I think about his perseverance because when I saw him on the corner that day he was in pretty bad shape, I was just able to bring him a cup of coffee and love on him," says Follett.

Alejandrez says Follett helped in more ways than one.

“He took me to Nordstrom’s Rack, people were kind of looking at me snickering a little bit but he told not to pay attention to them and just get whatever I needed so I got shoes, underwear, socks,  I was like, in heaven," says Alejandrez.

Alejandrez says one of the items he is most grateful for is a laptop Follett purchased when he found out Alejandrez would be returning to school. He recently graduated with multiple degrees and was accepted to several renowned California universities, including UC Santa Cruz which he has chosen to attend.

“That’s the laptop that I typed all my essays that helped me get into all these UCs and my twenty thousand dollar scholarship that I won, without that laptop, I wouldn’t have had the resources to do my homework at home," says Alejandrez.

Alejandrez says his time in rehab and school is what caused them to lose touch. Follett says he was overcome with joy when Alejandrez caught up to tell him how far he's come.

“That little voice inside your head when you see a homeless person that says don’t give them money they’re just going to buy drugs, if anything, what it showed me is like how God can use somebody who just says yes," says Follett.

Follett is now the owner of Kuppa Joy Coffee House in a few locations including the Fresno area. He says he hopes their story will inspire others to spread kindness.

These two friends say they hope to meet again for coffee in-person sometime in August.