HOLLISTER, Calif. (KION) A suspect has been arrested for the parental abduction of three children and burglary, according to the Hollister Police Department.

The abduction happened on April 30, 2021 at around 11:15 p.m. One officer with the department was dispatched to the 100 block of Hawkins Street after receiving a report of a parent, without custody, abducting three children from their home.

During the investigation, it was discovered that 35-year-old Johanna Gomez entered the home of the father of the children unlawfully, and took their three kids ages five, seven and eight. The department said Gomez fled the scene in a 2006 green Honda Pilot.

Prior to the investigation, the officer who responded to the incident said he had previously contacted Gomez the day before and she had made several "concerning statements," which made the officer question her mental stability. The officer adds that Gomez also left documents at the house that also raised concerns.

The California Highway Patrol was later contacted about the situation and advised to keep a lookout for the license plate of the runaway vehicle.

The department said officers had information Gomez may have been heading to a relatives home in Lathrop. However, they add that Gomez's family was not being cooperative with police.

The San Joaquin County Sheriff's Department and C.H.P. received a "Be on the Look Out" from the Hollister Police Department and both agencies were circulating the city of Lathrop to help locate Gomez and the three children.

A detective with the Hollister Police Department searched through online data and located a possible family member's address in Lathrop. After that information was passed to the nearest law enforcement agencies, at around 4 p.m., the San Joaquin County Sheriff’s Department said they located Gomez and the children at that address provided.

The Hollister Police Department said that the children were unharmed and in good spirits and have since been reunited with their father. Gomez will be booked into the San Benito County Jail on multiple felony charges including parental abduction and burglary.

Anyone with information on this investigation is asked to contact Officer Wells at (831)-638-4331. If you wish to remain anonymous, call the department's WeTip at (800) 78-CRIME, you may be qualified for a reward. 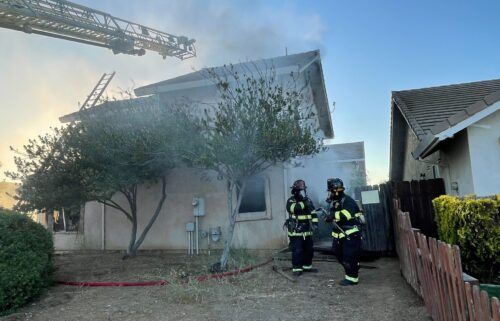