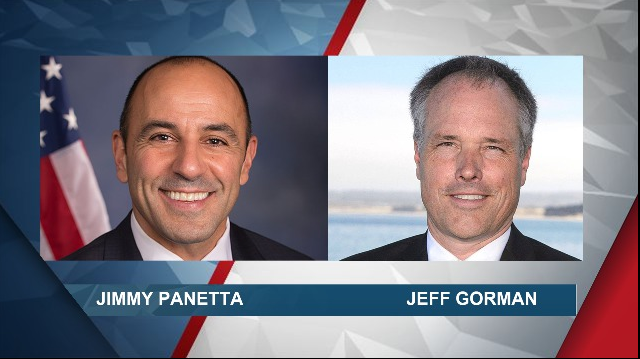 There aren't many similarities between the two candidates running to represent California's 20th Congressional District in Washington.

Two-term incumbent Jimmy Panetta (D) says he helped bring in 1.5 billion dollars to the district through the CARES Act, if you include business relief from the Paycheck Protection Program.

But an entire summer has since passed and Congress and the White House are in the middle of a months-long debate over an additional COVID-19 stimulus bill .

Panetta is part of the bipartisan "Problem Solvers" caucus. They have put forward proposals in recent weeks, including a 1.5 trillion dollar relief plan that was rejected by Democratic Party leadership.

"I believe it prompted our leadership, both Democrats and Republicans, to come back to the table and continue negotiations" Panetta tells KION. He adds, "a lot of times in this job it would be easy to throw up your hands and say 'let leadership deal with it,' but that's not why I was there."

The "Problem Solvers" figure is in between what is being offered elsewhere. Senate Republicans are narrowing in on a 500 billion dollar plan and House Democrats are proposing a 2.2 trillion dollar plan.

If you ask Panetta's challenger, Jeff Gorman (R), too much money is already being spent. "The response to the disease has been worse than the disease itself," Gorman tells KION.

Instead of a large stimulus bill, Gorman believes another targeted check is the better solution. The first one, near the beginning of the pandemic, was $1,200.

"People that are making hundreds of thousands of dollars didn't get the support, but people that are working class families did. Right through the IRS, not through these jurisdictions, like the Democratic Party wants to drive everything through these large collectivist organizations, and I find it discouraging," Gorman tells KION.

Like our Presidential candidates, the Central Coast's Congressional options are far apart on tackling climate change and the best way to address a record-breaking wildfire season.

When asked about rising temperatures, Gorman dismisses the idea relating to wildfires. He says forest management is the problem, mirroring the response from President Trump, adding that we also need to get to the fires faster.

Gorman says the federal government "could have a central command in the middle of the country, somewhere like Colorado, where we have jets that are fueled and ready to go and hit a new fire, while it is still small and before the smoke builds up in the atmosphere, very hard and put it out."

"And then reinvest that money into communities that have been affected by climate change," Panetta says referring to the Climate Action Rebate Act. "Research and development for cleaner, cheaper and more accessible green energy. And then job transitioning for people going out of the fossil fuel industry and into the 'green' economy."

In 2019, Panetta introduced more bills than most members of Congress, but having them become law is another story. He says don't blame the Democratic-led House of Representatives.

"Senate Leader McConnell has no interest in actually doing anything except confirming judges unfortunately, and I am laying a foundation with my legislation that when the time is right we will be able to pass these pieces of legislation," Panetta says.

While Gorman criticizes the flurry of bills, he says Washington does need to step in, in cases like "sanctuary states," like California, and where civil unrest leads to a damage-causing riot.

"The federal government should be empowered able to withhold money until you are going to comply with federal law. Another one would be in regard to whether you shut down riots that destroy private property. And if the jurisdiction won't defend those property rights, those are anarchic jurisdictions and the federal government should step in," Gorman says.

Panetta and Gorman both advanced out of California's March 2020 Primary: