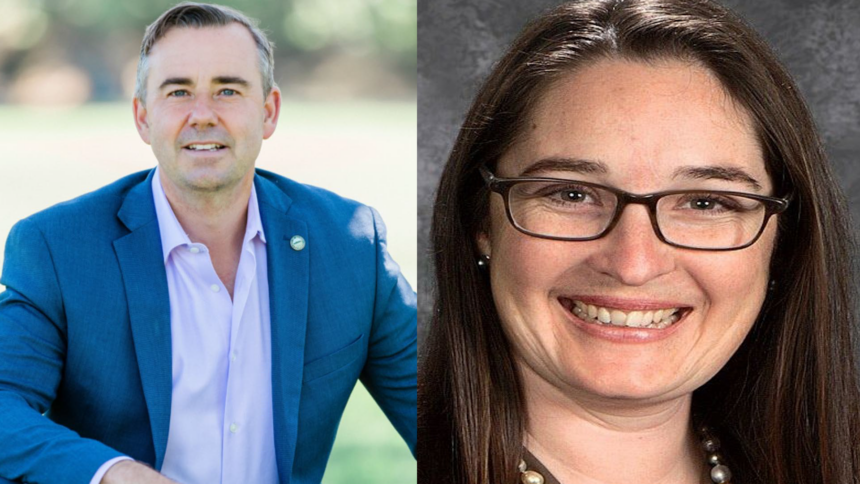 SALINAS, Calif. (KION) A Monterey County supervisor race is churning out big bucks with one candidate already raising more than double the dollar amount of campaign contributions over his rival to date. It's a combined total of over a million dollars, as the runoff between Salinas Councilman Steve McShane and MPUSD Board Member Wendy Root Askew intensifies weeks before Election Day.

McShane and Askew have a lot in common. Both went to college together at Cal Poly in San Luis Obispo. Both are longtime residents of Monterey County with growing families to take care of. Both are deeply involved in their communities in Salinas and the Monterey Peninsula.

But their rise to political office came from different outlets. And their styles couldn't be more unalike.

McShane rose to the public spotlight as a three-term Salinas City Councilman, but he's proud to highlight his agricultural and business background, especially when it comes to restoring a post-COVID-19 economy.

"Not very many residents are rosy about the job that the County of Monterey has done when it comes to COVID. Businesses have closed, people are unemployed. It's very, very sad and very worrisome. As a small business owner, I will work tirelessly to see to it that small business is protected. I've taken steps as a councilmember to offer emergency lending, waive fees for outdoor retail and dining. This is only the beginning," said McShane.

Askew on the other hand, who won the primary vote in March with a little more than two thousand votes over McShane, touts her longtime role as a legislative aide to outgoing Supervisor Jane Parker as why she is uniquely qualified to take her place.

As an MPUSD school board member, she is also faced with the issues of our new COVID-19 pandemic world.

"Since March, so much of my focus and priority has really been on responding to the COVID crisis in Monterey County ensuring that all of our residents have what they need to stay healthy and safe. It's been looking at how do we get communication increased and available in all the languages it needs to be, it's looking at how do we increase testing capacity and testing sites throughout the county," said Askew.

According to the most recent campaign disclosure statements, or California Form 460s found on the county elections website, McShane has raised a significant amount more money over Askew in both 2019 and 2020.

It may be why the Salinas councilman was able to send out mailers that came under scrutiny from the Monterey County Democratic Party for what they say imitates their own voter guide "in both style and content" and accused McShane of trying to mislead voters.

The difference: McShane is endorsed by the Salinas Valley Democratic Club, while Askew is the official Democratic Party pick for district 4.

The Salinas Valley Democratic Club was quick to point out that McShane's mailer in fact listed their own endorsements, of which McShane is one. The club says McShane had permission to reprint that list.

Neither candidate had much to say about the whole thing expect that they are proud of their endorsements.

"You know, we need a supervisor that's ready to lead Day One. Someone that has the energy, the creativity, the ideas and the proven track record. I believe I've got more experience and the benefit of coming from small business, a small business that has been impacted and is operating in COVID-19," said McShane.

"Issues of access to health care, issues of social and economic justice for our immigrant communities, issues of supports for families and seniors on fixed incomes, all of those folks need a voice on the Board of Supervisors. And I have the experience and the relationships to move their voices forward, to make sure that they're heard," said Askew.