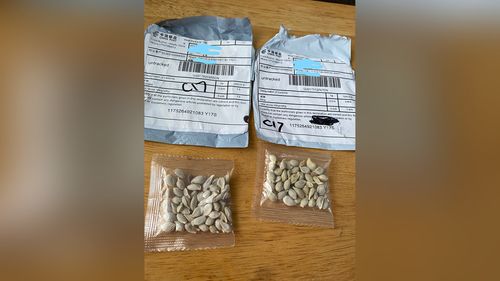 The packages are believed to be coming from China, according to the US Department of Agriculture (USDA). Photos shared by state agriculture departments show packages marked with labeling from China Post, which operates the official postal service of China. Some of the labels also indicate that the packages contain jewelry, although inside is typically a packet of seeds in clear, plastic packaging.

Salinas resident Rose Scott placed an order for coat hangers and some tomatoes and sunflower seeds, but what arrived on her porch was something she didn't recognize.

“All of these weird random seeds with something else that I didn’t actually order,” Scott said.

The Santa Cruz county agricultural commissioner said the concern is that the seeds could be an invasive species.

“We don’t know where [the seeds are] coming from. They’re not certified for entry into the U.S.” ag commissioner Juan Hidalgo said.

The USDA says it could be a part of a brushing scam, where a seller sends unsolicited packages, and posts fake reviews to boost sales. Experts say to make sure your personal information hasn’t been compromised.

“We don’t want to introduce any new diseases into our state. It could be detrimental to the environment," Hidalgo said. "When we get an invasive species, it costs a tremendous amount of money to eradicate them.”

The San Benito ag commission said they've received two reports of the seeds, and Monterey county has had 13.

Scott did receive some of the seeds she ordered, but decided not to plant any just in case.

“Now I don’t want to plant any of the seeds I ordered, because you just don’t know what you’re getting or if they put something in with the seeds I did order,” Scott said.

The local agricultural commission is sending the seeds they’ve been given to Sacramento where testing will be done to determine what exactly these seeds are, and where they may have come from.