It was a rocky first trading day of the year for Wall Street as stocks fell sharply and investors grew worried about the the pandemic and the economic recovery in 2021.

Investors took profits off the market’s record highs set last week, and they took a more cautious position ahead of the high-stakes runoff election in Georgia Tuesday, which will decide the balance in the Senate, analysts said.

Wall Street had started the day in the green, putting stocks on track to start the New Year off with a bang. The Dow and the S&P 500 finished at record highs on the last trading day of 2020. But trading quickly turned south Monday.

Coca-Cola and Boeing were the worst performers in the Dow after both companies were downgraded by analysts. Most S&P sectors, with the exception of energy, ended in the red.

It might not be the start to the year we all wished for, but there’s no reason to panic.

“Despite some familiar issues, we believe that global stocks have further room to rise in 2021, and that low interest rates continue to make equity valuations look attractive relative to bonds and cash,” said Mark Haefele, chief investment officer at UBS Global Wealth Management, in a note to clients.

Meanwhile, the economic data released Monday wasn’t too bad. America’s manufacturing industry was strong at the end of 2020 and the IHS Markit purchasing managers index for the sector rose to its highest level since September 2014.

Construction spending for November came in just below economists’ expectations.

But it wasn’t just stocks that tumbled Monday.

US oil prices took a hit and settled 1.9%, or 90 cents, lower at $47.62 per barrel, as investors await a decision on February production levels from the OPEC nations and other petroleum producing allies.

No decision was made during a teleconference the countries held on Monday, even as most participants support a rollover of current production cuts. The meeting was adjourned for 9:30 am ET Tuesday.

— Chris Liakos contributed to this report. 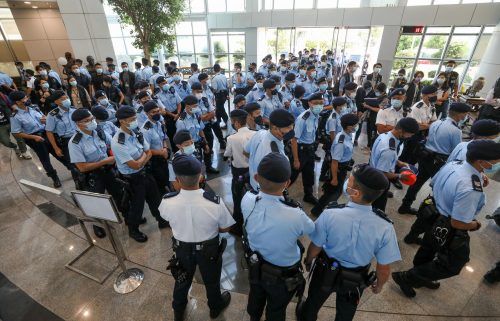